How New Social Network Plum Can Help with Your Business Networking 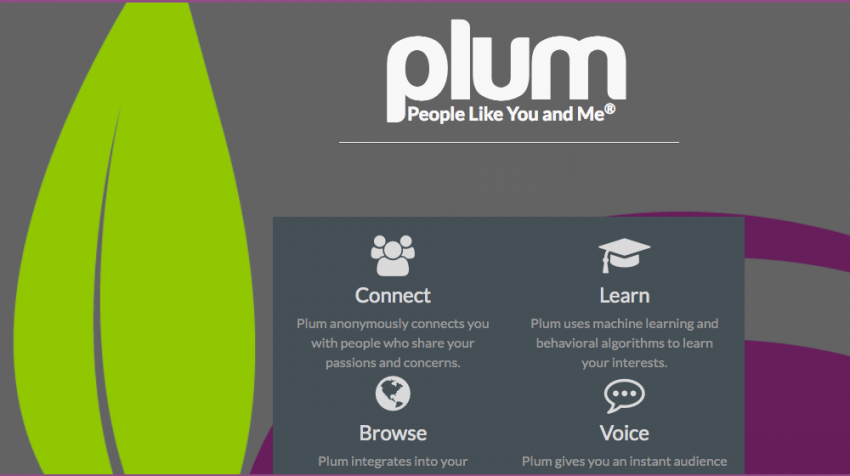 Plum, short for People Like You and Me, is a community platform that connects individuals with others who share the same interests, passions and concerns. Similar to Facebook or LinkedIn, Plum allows users to discuss ideas and topics openly, join groups and chat with other users privately.

How Plum Social Network is Different from Others

Plum differs from its social network counterparts in three respects (which it refers to as “core principles“): It relies on the interest graph to connect, focuses on anonymity and has a strong commitment to transparency.

Plum is built around the “interest graph” — the network of those who share the same interests and, in Plum’s case, who have visited the same websites — as the means to connect users. (The site has more than 350 different interest categories in all.) Most other social networks — Facebook in particular — utilize the “social graph,” the network of personal connections.

Another differentiator is that Plum is anonymous by default. Users who wish to reveal their identity can turn off anonymity and use their Plum name, which is like a Twitter handle, to build up a history with those they meet. (As part of its kitsch, Plum ascribes “fruit” monikers to users in anonymous mode.)

“The lack of anonymity on social networks like Facebook and LinkedIn mean that those systems are little more than billboards for the best parts of your personal and business life,” Cowdrey said. “Plum respects your privacy and commits to preserving your anonymity until you choose to reveal yourself.”

A third core principle is Plum’s commitment to transparency with its users regarding how, where and why it uses their personally-identifiable information.

Plum learns about users’ interests in one of two ways:

Plum has a toolbar for Chrome and Opera browsers that, when installed, uses machine learning and behavioral algorithms to determine users’ interests.

The toolbar, which stays neatly tucked away in the lower-right-hand corner of the browser window, samples the websites that users visit, automatically creating an interest-based profile for each person. It uses the profile data to connect with others who have similar interests.

The toolbar does not record or store data from NSFW sites — or what Plum refers to as NSFS (Not Safe For Spouses) — but ignores them altogether.

Plum guides those who use an unsupported browser through a series of questions to discover their interests.

Anyone familiar with Facebook, Twitter, LinkedIn (or just about any other social network that has a newsfeed) will readily recognize Plum’s feed. It contains users’ thoughts, activity from the groups in which the user is a member, as well as new groups that Plum has identified for users to join. 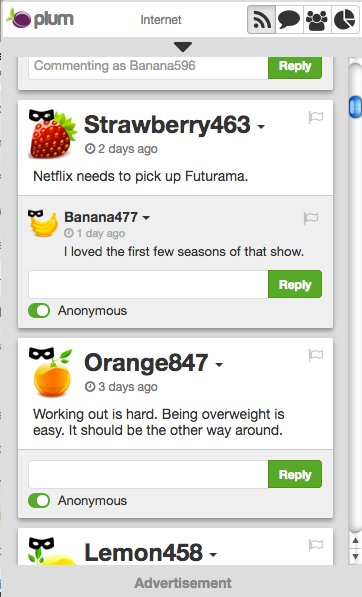 Users can apply filters to refine the feed to reflect what they would like to see. Filters include:

Chats are private and can be between the user and up to 20 other people. Users can discover new people by creating a new conversation and match people by proximity or similarity before sending a message. 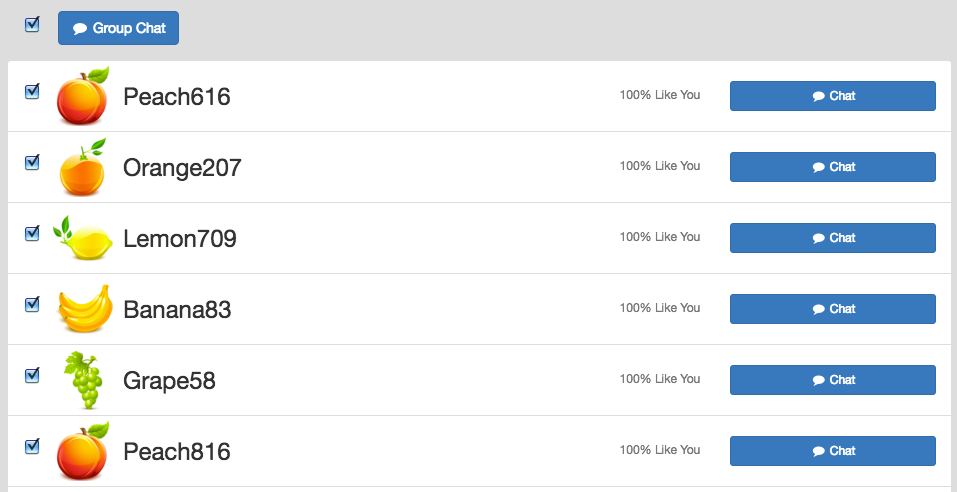 Groups are smaller communities within Plum that revolve around specific topics, subjects of interest or group participants. 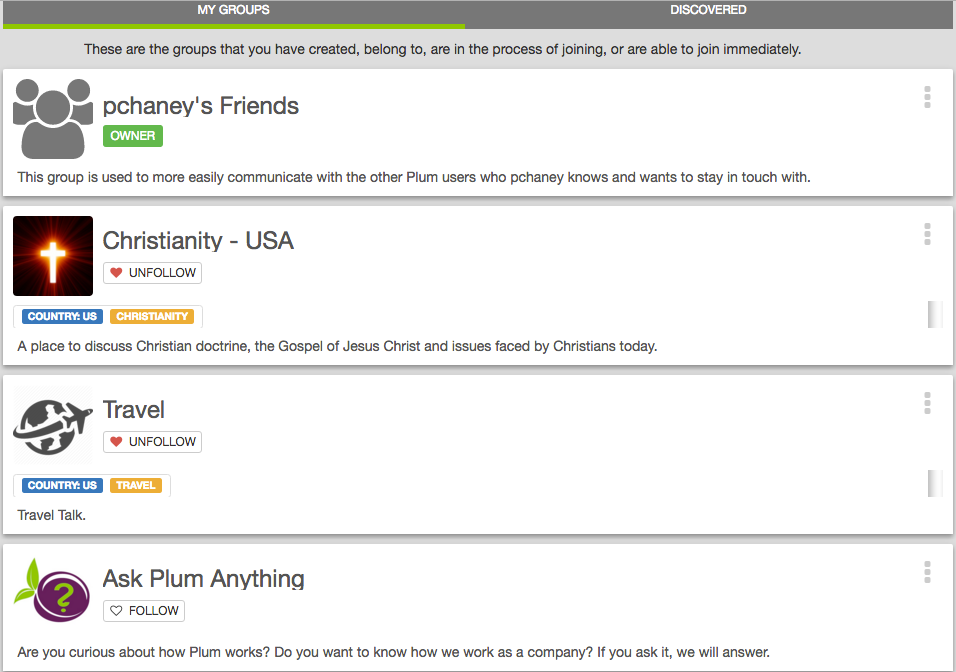 Users can access the groups they have already joined, join new groups that Plum identifies and create groups of their own. Groups can also be private so that others must request an invitation to join.

The Discover page allows users to view and update interests within Plum as well as find others who share those interests.

How to Use Plum

Users who sign up for Plum (which they can do using Facebook, Google Plus, LinkedIn or an email address) must verify their age (only those 18 and older are allowed in) and agree to the following “Plum Pledge“:

Users who install the Chrome or Opera browser toolbar will see a widget like the one below appear when they visit websites.

The widget contains a “profile pie” that users can adjust to filter and refine searches to “Find People Like Me.” It starts with three options: “Industry,” “Hobbies & Pursuits” or “Mind, Body & Spirit.” 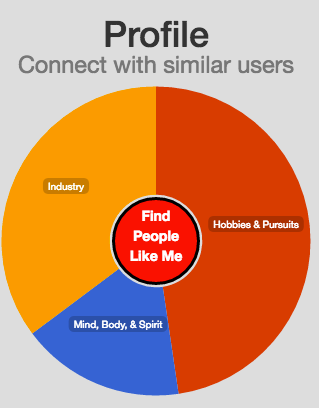 Click one of those and it reveals relevant sub-categories. For example, select industry and the pie changes to show other topics, such as business, technology, finance, real estate and science. Click “business” and other categories appear, and so on. 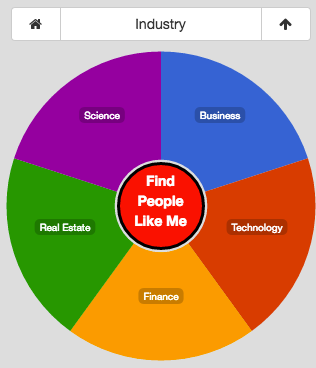 At any point, users can click the red “Find People Like Me” button to discover others who share their interests. Also, users who do not see an interest of theirs represented can suggest adding it utilizing the form provided. 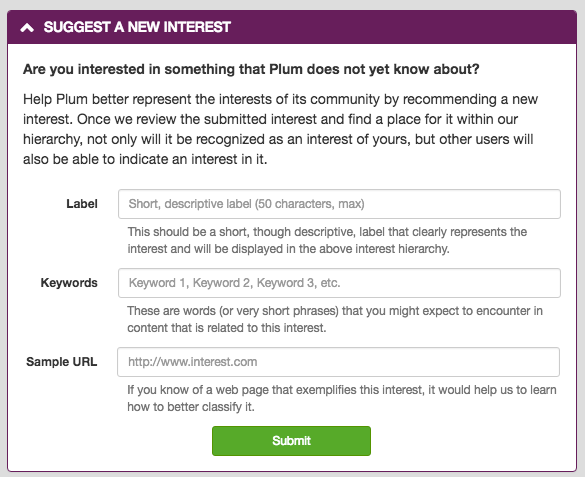 How Small Businesses Can Use Plum

The key question is whether small businesses can use Plum and, if so, in what ways? Cowdrey suggested the following, as examples:

Generally speaking, Plum gives business users the opportunity to share their voice with a built-in audience, build interest- and location-based communities and grow those communities with others who are invited to join.

Cowdrey cited one company, a sewing machine repair shop, that set up a Plum group for its customers, to enable them to talk about sewing with the store owner and other customers. They can also use it as a customer service tool, to ask questions or get help with problems.

“By setting up the group to recruit new users within 15 miles of the shop and setting the interest category of the group to Arts & Crafts/Needlework, anyone with that interest who joins Plum and lives within the designated radius will receive a notice about the group,” Cowdrey said. “They can instantly start discussing sewing with the shop’s customers and owner.”

With the browser tool installed, the Plum widget will appear on each website users visit, effectively turning the site into an online community.

Site owners can copy the permalink URL shown on the toolbar, which is unique to the site, and share it on Facebook, Twitter and via email. Anyone who clicks the link is asked to register, to join the community. 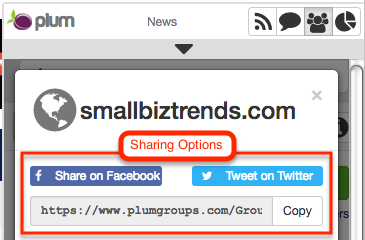 Site owners can also embed the link on the website, to further promote the group. Cowdrey said that, eventually, Plum will have HTML code that owners can use to embed the widget into the site, much like the widgets that Facebook and Twitter provide for their newsfeeds.

“Plum’s widget would allow users to read comments and converse,” Cowdrey said, “which will add a level of interactivity that can lead to more top of mind awareness, stronger brand affinity and improved customer satisfaction.”

Cowdrey stated that Plum plans to provide analytics for the Groups component so that group owners can see aggregated behavioral data from members based on their browser history.

“The sewing machine shop owner might be able to find out that 75 percent of her group members frequent Etsy, for example,” Cowdrey said. “Having that information could inspire her to open an Etsy store, to sell sewing machine parts.”

Plum Is Free to Use

Another benefit, according to Cowdrey, is that groups are free to set up and use.

He added that members of Facebook Groups don’t typically see messages posted to the group because of the feed algorithm restrictions, nor do they serve as a recruiting tool to invite others.

“We always envisioned Plum as being the ultimate brand community for small business,” Cowdrey said. “Often, small businesses do not have access to the same kinds of behavioral data that is available to large companies. In time, Plum will provide the analytics needed to change that.”

Currently, Plum is only accessible via the web platform. Android and iOS apps are on the drawing board.