Mandatory Retirement Savings Program Coming to a State Near You? 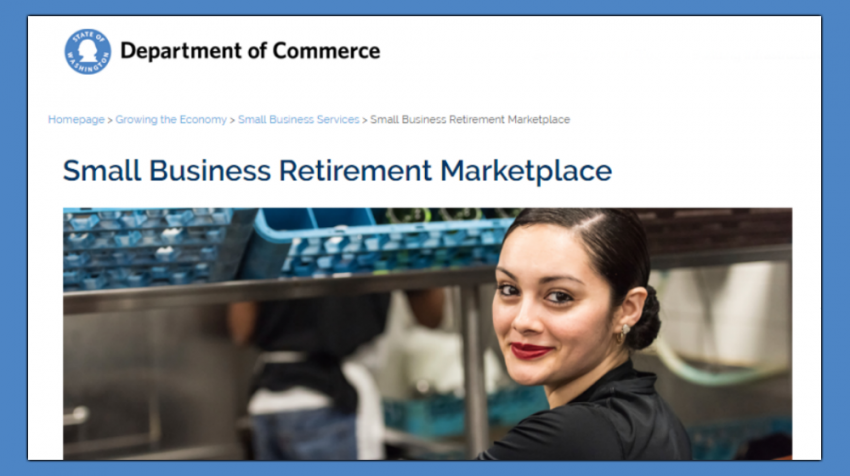 Washington state has created a Small Business Retirement Savings Marketplace where small businesses can go to get affordable retirement plans to offer their employees. The marketplace is expected to open in January, ahead of an expected mandate in the state.

There are already some states where a mandate is in place, and even some cities are exploring the possibility.

Two states — Oregon and Illinois — are starting marketplaces in June 2017, and more are on the waiting list.

There is no one-size-fits-all plan. Each state has its contingencies and requirements. Here are a few examples:

California’s plan, called Secure Choice, will require that retirement plans be in place for companies with five or more employees and will offer a five percent Roth IRA contribution. The plan would provide coverage to nearly seven million small-business employees in the state who lack access to workplace programs.

In Connecticut, employers are subject to the mandate if they hired at least five employees on October 1st of the preceding year, and paid each employee at least $5,000 in the prior year, according to ADP.

Illinois, which also refers to its plan as Secure Choice, will automatically enroll employees in a Roth IRA-like savings account. It will deduct a default three percent from an employee’s paycheck and move the money into a state-run investment pool.

Oregon will automatically enroll employees in a pooled plan. Workers will have the opportunity to opt-out should they choose.

Washington will have plans for businesses with less than 100 employees, including solo entrepreneurs. Participation in the marketplace is voluntary for employers and staff. Also, accounts are portable. When employees switch jobs, they can take their plans with them.

(Visit the Pension Rights Center website to see a full list of states that have either enacted legislation to provide retirement plans or are considering doing so.)

State of Retirement Savings in the U.S.

Studies show that more than half of workers — some 60 million nationwide — lack workplace retirement plans, especially those employed by small businesses and freelancers, said Time magazine. It added that 90 percent of employees who work for companies with pension plans take advantage of the benefits versus 20 percent who work for companies with no retirement savings plan.

According to Capital One’s Spark Business Barometer, as reported by Small Business Trends, the number of small businesses offering their employees a retirement plan has dropped by almost 50 percent. Now, a mere 13 percent of small business owners provide such programs.

“The Future of Retirement: A New Reality,” a report from HSBC, states that those currently approaching state pension age could experience a significant drop in their standard of living during the final seven years of retirement. The average length of retirement in the U.S. is approximately 21 years while the typical citizen’s savings are likely to last for just 14 years at present, the report said.

A recent AARP Washington survey found that 25 percent of adults ages 45 to 64 have saved $25,000 or less for retirement.

“People save more when they have a workplace savings option, but many small businesses have been unable to provide retirement plans to their employees due to high costs and administrative burdens,” said AARP, which advocates the use of retirement marketplaces like the one in Washington state.

This statement, from the New York Times Editorial Board, is perhaps the most telling of all:

“At any given moment, about half of the private-sector employees in the United States — some 60 million people — do not have any type of employer-sponsored retirement plan.

“The result is a growing American underclass, in which a third of current retirees live almost entirely on Social Security and fully half of future retirees will face reduced standards of living.

“Worse, the coverage gap has long proved intractable, with Congress and the financial industry unable or unwilling to design or support truly simple and low-cost retirement savings plans.”

Small businesses in some states already face heavy employment burdens. For instance, New York’s paid family leave act requires that companies offer their full-time and part-time employees up to 12 weeks of paid time off to care for family members.

New York, California and several other states have passed legislation guaranteeing a $15 an hour minimum wage. And, unless Congress intervenes, significant pay increases for exempt employees making under $23,660 will go into effect on December 1, 2016, thanks to the Department of Labor’s new overtime rules.

Ray Keating, chief economist, Small Business & Entrepreneurship Council, a Washington D.C.-based small business advocacy organization, in a phone conversation with Small Business Trends, said, “If you are looking for an example of politicians at the state and local level being quite activist, this is certainly one. Retirement options are already there in the marketplace for people who want to take advantage of them.”

According to Keating, the bottom line is what mandates will cost the business owner.

“Small business owners try to offer the best package they can to attract the most qualified people,” he said. “But the reality is that many businesses can’t afford to provide the level of benefits to make them competitive against larger companies. Throwing a mandate like this onto a small business is not going to change that reality.”

He asserted that the position of SBE Council would be to oppose any such mandate due to the financial burdens placed on businesses.

“Generally, we support the state-run retirement model as one that allows small businesses to match the offerings of their larger competitors and create a workplace that encourages employees to stay with the business, ultimately increasing retention and reducing turnover and training costs,” said Steve Rouzer, communications manager for the organization, in an email to Small Business Trends.

The issue of mandates aside, retirement plans are one of the most attractive benefits a business can offer. Packages that include retirement saving make companies more competitive with their larger counterparts.

Other reasons to provide a retirement savings plan include:

If, as Keating suggests, activist politicians have their way, more states will join the retirement savings mandate movement. So it’s best to prepare in advance by offering a plan before proposed legislation takes effect.

Many types of plans are available, which small business owners can implement. These include the popular 401(k) and Roth 401(k) as well as profit-sharing plans, SIMPLE IRAs, Simplified Employee Pension (SEP) plan, Employee Stock Ownership Plan (ESOP) and Keogh plans.