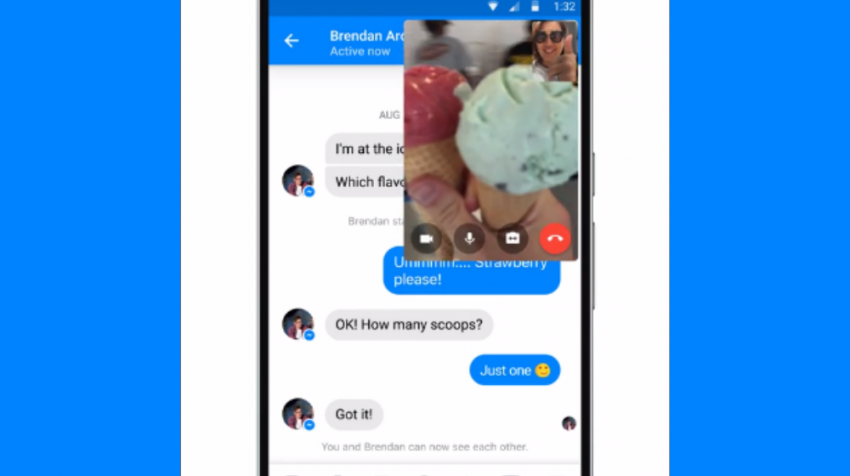 Through the years, Facebook has consistently added more and more features and services to its platform. Some of those features even have practical business applications. The latest, a real-time video option in Messenger, could even serve as an alternative to other video chatting options.

Also recently, YouTube, Instagram and more popular brands made headlines of interest to the small business community. Read on for the full list in this week’s Small Business Trends news and information roundup.

Facebook Adds Instant Video to Messenger: Is This a Skype Alternative?

A recent update by Facebook has furnished Facebook Messenger with the ability to stream live video — a feature that’s been widely enjoyed by fans of rival applications like Snapchat, Google Duo, Skype and FaceTime. According to Facebook, the instant video update now allows Facebook Messenger users to broadcast real-time video in Messenger text exchanges.

A good number of YouTubers who spend hours creating content on the popular video-sharing website are now up in arms protesting YouTube’s enforcement of its “not advertiser-friendly” guidelines. The platform is now starting to withhold paychecks for videos that are marked as inappropriate for advertising.

The widely popular online video and photo sharing app Instagram recently struck 1 billion downloads mark on the Google Play Store and joins other Facebook owned online services, Messenger, WhatsApp and Facebook itself, as some of the few apps that have crossed the billion mark.

Small businesses in New Jersey worried about a potential increase in labor costs can breathe easy. New Jersey Governor Chris Christie has vetoed a bill to raise the state’s minimum wage to $15 per hour. Concerns About Hiking the Minimum Wage in New Jersey Behind Veto Gov.

Want to Live in Buckingham Palace? The Royal Family is Hiring (Watch)

If you’ve ever dreamed of living in a palace, now is your chance. Buckingham Palace, the modern home of the U.K.’s royal family is hiring a housekeeper. The job entails cleaning and caring for the interior spaces of the palace, as well as helping with special events and taking care of guests. It’s a big job, yet the annual salary is just about $22,000 a year.

Product startups aren’t the only entrepreneurs using crowdfunding to finance their products. Crowdfunding giant Kickstarter has hit a landmark, recording $100 million in pledges to small publishers and self-publishing authors.

Business credit scores are one of the key factors determining whether or not an enterprise qualifies for a loan. Yet surprisingly enough, most businesses don’t even know what their scores are. This astonishing revelation has come from a new survey by Manta, an online community for small business owners.

Angel investing — efforts by individuals to finance private companies owned and operated by people who are neither their friends nor their relatives — is substantially higher now than it was in 2002, when data tracking this activity first became available.

Miss playing Super Mario Games? Well, you don’t have to dig out that old Super Nintendo if you decide to play again. Nintendo just announced a brand new Mario game that’s built specifically for mobile. That’s right — you will soon be able to play Mario on your phone. The game, called “Super Mario Run,” features the popular character running in a two dimensional world.

Samsung (KRX:005930) has launched the U.S. Product Exchange Program for Galaxy Note 7 owners. The program is in response to some recent reports of battery cell issues with the Galaxy Note 7 device. Could your small business benefit by exchanging your existing devices? The mobile giant announced this program in a press release recently.

When Lenovo (HKG:0992) announced the modular Moto Z line, the stated purpose was to give smartphone owners the ability to easily transform their devices with capabilities that could be added in module form. Modules like a projector, extra battery and a JBL speaker for the Moto Z were available at launch, with a rumored camera in the works.

Gathering user feedback about your website or product visuals is becoming increasingly important for businesses. That’s why UpNable offers a few different options for businesses to test their user experience and gather feedback from targeted groups of consumers. Read more about the business and its offerings in this week’s Small Business Spotlight.

The United Parcel Service (UPS) announced last week that it would increase its rates for US air and ground shipping services by 4.9 percent. International shipping rates will also go up by the same percentage. In a press release announcing the increase, UPS (NYSE:UPS) said it’s continuing to invest in “speed, scope and coverage of our transportation network.

Tech startup Cronycle recently announced that it had raised $2.6 million in funding to improve on its collaborative research platform, which lets users curate articles from Twitter and RSS feeds into Pinterest-like boards and allows teams to collaborate on projects by following curated boards.

Kloutly, an expert advice platform has just closed a $25,000 seed round led by 25K Startups. Think of Clarity.fm with a Quora-esq interface and the vision behind Toptal – this would best describe Kloutly.

Nigeria is the Next Silicon Valley, According to Mark Zuckerberg (Watch)

The next big startup hub might not be a trendy metropolitan area like Silicon Valley. In fact, if you ask Mark Zuckerberg, the growing startup community in Lagos, Nigeria is one to look out for. The founder of Facebook recently visited the sub-Saharan country for the first time to see the vibrant developer and entrepreneurial ecosystem there.

Modularity has been defined as the degree to which a system’s components may be separated and recombined. And nowhere is this concept being applied more than the tech sector, where companies are introducing products that allow users to pick and choose what they need instead of cramming everything into a single device.

Popular domain registration and web hosting company GoDaddy (NYSE: GDDY) announced Sept. 6 that it has entered into an agreement to acquire ManageWP, a WordPress site management tool. ManageWP enables web designers and developers to manage multiple WordPress sites from a single dashboard, regardless of where they are hosted.

So How Safe is Your Data in the Cloud? Dropbox Breach Again Raises Doubts

Cloud storage has utterly redefined the way we share files and conduct business on the web. Services like Dropbox, Google Drive and Box provide hundreds of millions of users with a free and simple way in which to protect all of their private data.

Keyboards and Cameras are So 2015: Lenovo Yoga Book Lets You Write and Draw on Your Laptop

Digital technology is great, but when you are in a creative mood there is nothing like being able to quickly write, draw, sketch or doodle something down on a piece of paper. The new Lenovo Yoga Book is bringing the best of both worlds together in a device that its namesake, “yoga”, delivers: flexibility.

CloudJumper, a Workspace as a Service (WaaS) platform, recently announced that IT veteran Scott Bechtold has joined the company as channel sales manager. He will be tasked with developing new channel partners throughout North America. With 31 years of IT sales and management experience, Bechtold is no stranger to the industry.