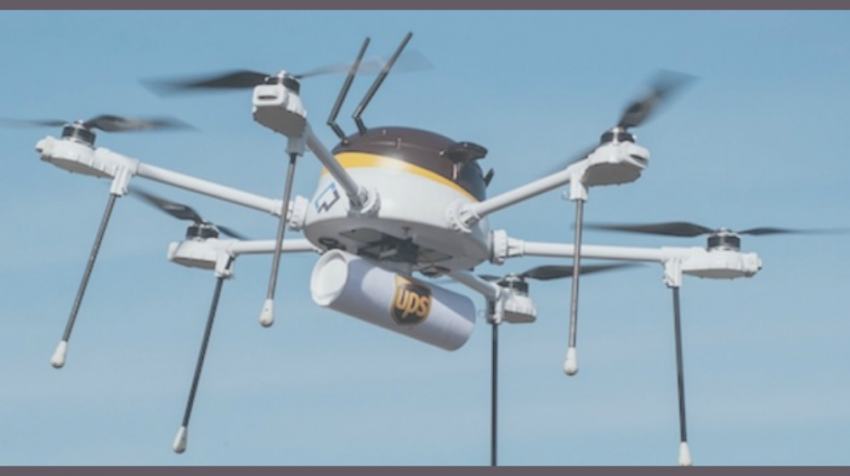 “Our focus is on real-world applications that benefit our customers,” said Mark Wallace, UPS senior vice president of global engineering and sustainability in a press release announcing the tests. “We think drones offer a great solution to deliver to hard-to-reach locations in urgent situations where other modes of transportation are not readily available.”

Testing began with a staged mock delivery of urgently needed medicine from Beverly, Mass. to Children’s Island, which is about three miles off the Atlantic coast. The test was conducted to gather more information about drone uses and capabilities. In the mock scenario, the companies said the drone successfully carried an asthma inhaler to a child at a camp on the island, which is not reachable by automobile.

“We’re thrilled to partner with UPS in this endeavor,” said Helen Greiner, CyPhy’s founder and chief technology officer. “Drone technology used in this way can save lives and deliver products and services to places that are difficult to reach by traditional transit infrastructures.”

Innovation through aerial automation and robotics has long been a focus for the world’s largest companies. Amazon whose current delivery is handled by UPS along with FedEx, for example, first announced plans to begin commercial drone delivery back in 2013. Plans have been ongoing since then.

Chipotle earlier this month partnered with Project Wing, a subsidiary of Google’s parent company Alphabet, to test drone delivery of a tasty Mexican menu item. However, the first federally-approved commercial drone delivery was achieved by the small Australian start-up Flirtey that was first in flight over U.S. airspace. Flirtey is said to have delivered supplies to a rural medical clinic in Virginia in late July 2015.

Whatever the outcome of this apparent drone delivery race in the U.S. and elsewhere across the globe, small businesses are probably better off with shippers like UPS and FedEx looking at cutting costs with unmanned aircraft deliveries. Perhaps drone deliveries could help bring down the rising costs of shipping packages and consequently bring some much needed relief to small businesses.

The CyPhy drone used in the UPS test is the Persistent Aerial Reconnaissance and Communications (PARC) system. The battery-powered drone flies itself, so very little user training is required, said UPS and CyPhy. It is extremely durable, has night vision and features secure communications that cannot be intercepted or disrupted, added the companies.