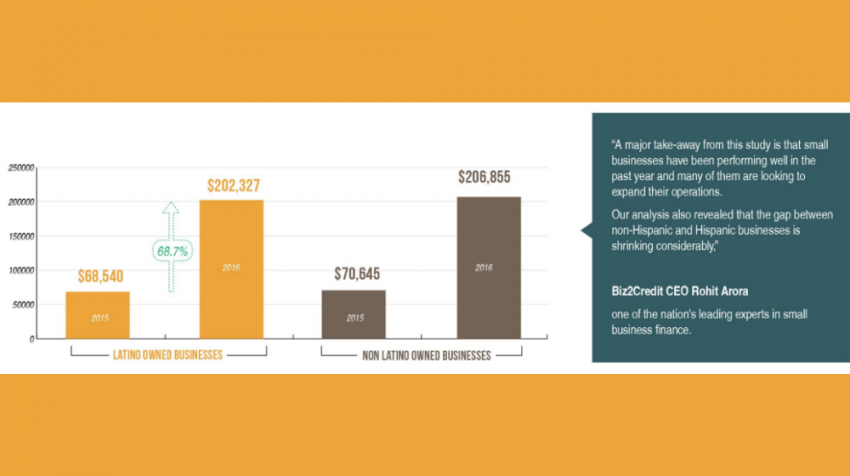 Hispanic-owned businesses are on a roll, reveals a new study.

According to the Biz2Credit Hispanic Small Business Credit Study, Hispanic-owned companies had average annual revenues of $202,327 in 2016, up from $68,540 the previous year.

The number of loan applications by Latino entrepreneurs made through Biz2Credit.com grew by 68.7 percent in the past 12 months.

Average net income for Hispanic businesses grew substantially, jumping from an average of $50,205 in 2015 to $132,693 in 2016. In comparison, non-Hispanic business owners’ average annual net incomes were approximately 8 percent lower in 2016.

“A major take-away from this study is that small businesses have been performing well in the past year and many of them are looking to expand their operations. Our analysis also revealed that the gap between non-Hispanic and Hispanic businesses is shrinking considerably,” said Biz2Credit CEO Rohit Arora, one of the nation’s leading experts in small business finance.

It’s worth noting Hispanic-owned businesses in the U.S. have been growing at a pace 15 times the national rate.

“The fact that average credit score for Hispanic entrepreneurs falls below 600 is still a cause for concern because that is a benchmark that many banks use before they even consider processing a loan request,” explained Arora.

For the study, Biz2Credit analyzed the financial performance of 2,000 Hispanic-owned businesses and 25,000 other companies with less than 250 employees and less than $10 million in annual revenues. Those businesses were compared with 20,000+ companies owned by non-Hispanics.