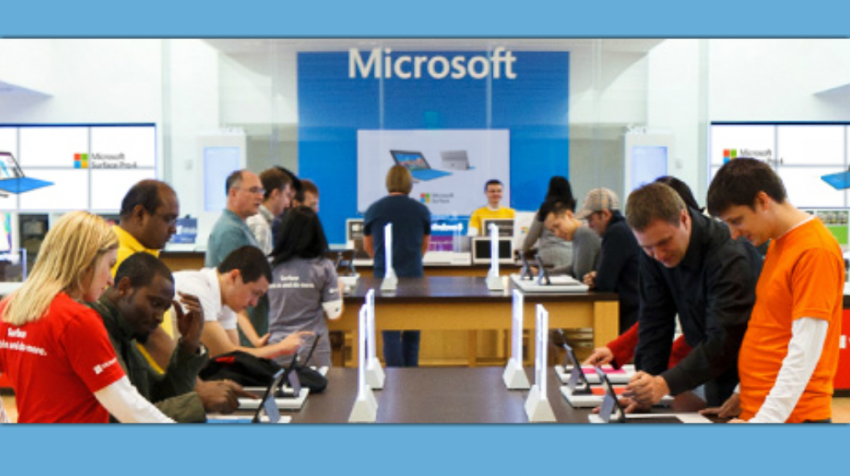 Microsoft is a huge business with massive resources to potentially help small businesses. And it’s taking another step toward offering that help by introducing SMB Zones in its stores around the country.

But it wasn’t all good news for small businesses this week. Business dashboard Dasheroo announced that it is shutting down its service. You can read about these stories and more in this week’s Small Business Trends news and information roundup.

Of the thousands of small businesses that open their doors each year, 50 percent will close within five years, according to the Bureau of Labor statistics. To address this problem, Microsoft (NASDAQ:MSFT), through its network of more than 100 stores in the U.S.

Business Dashboard Dasheroo is Closing Down

Dasheroo, the business analytics software platform founded by Vertical Response co-founders Janine Popick and her husband John Hingley, announced that it is closing down due to the inability to secure funding or locate a purchaser.

Payroll City, a cloud-based Payroll and HR solution, recently announced a new partnership with EaseCentral, an HR and benefits software as a service (SaaS) platform, to launch real time integration of payroll, HR, benefits enrollment and Affordable Care Act compliance for small businesses with 2 to 200 employees.

One in five small business owners say they would be more likely to sell their companies if Hillary Clinton is elected to the U.S. Presidency in November, a new survey has claimed. Clinton has been sitting on top in the national polls since July, and currently enjoys a narrow lead over Republican challenger Donald Trump.

Australian startup Canva recently raised another $19.8 million in funding, bringing its value to an estimated $458 million. Canva, founded in 2012, describes itself as an easy-to-use graphic design platform to help every day people design products such as business cards, posters and social media posts. It has more than 10 million users in over 179 countries.

Publicize, a PR platform for startups and entrepreneurs, this week announced the launch of Publicize Zero, a free, DIY public relations platform that aims to open up PR for the estimated 100 million startup founders that launch businesses annually across the world, regardless of their location or budget.

New Promo Feature from Slidely Aims to Make Every Marketer Into a Video Creator: But Does it Succeed?

The current surge of videos in content marketing and social media channels is almost a clear indication of the ever increasing demand for visual content. In the past year alone, Facebook averaged about 1 billion video views per day and with the realization of just how effective videos can be, many businesses are now turning to videos to promote their products and services.

Arranging shipments for clients with less than a truckload of merchandise may not sound like the most interesting business to be in, but it is often necessary. Using a freighter exchange service like FreightorGator can actually help relieve some of that burden for small businesses.

Facebook (NASDAQ:FB) had 1.71 billion monthly active users as of the second quarter of 2016, and by the time the company finishes monetizing its platform, it might be selling everything under the sun. The latest venture is the second iteration of Marketplace, which was first launched in 2007.

Twitter (NYSE:TWTR) isn’t just a social media network. Over the course of the last decade, the microblog site has emerged to become an integral part of global society in its own rite. Twitter is a place where anyone can find fame, elections are fought and won and news travels the globe at break-neck speed.

Here’s another very good reason for your business to be more active on social media. A new study of over 1,000 U.S. consumers by Sumo Heavy Industries, a digital commerce strategy firm, has found a 198 percent increase in social media referral traffic to eCommerce sites between 2014 and 2015.

Despite facing tremendous management challenges, women entrepreneurs are determined to make it, a new study has found. According to a survey by Vistaprint, an online provider of marketing products and services to micro businesses, 69 percent of women entrepreneurs expect more financial success for their business in the next year.

The Next Great Business Opportunity Might Be on Mars (Watch)

By now, you’ve likely heard that Elon Musk, CEO of rocket science company SpaceX, wants to build colonies on Mars. But what you might not know is that he wants to start those colonies by 2022. That may or may not be a realistic goal. But it’s certainly ambitious. And the company is making strides that could very well make that ambitious goal into a reality.

Who needs a self-driving car when you can have a tiny robot that talks to you throughout your commute? That’s right, while other car companies are fighting for their share of the autonomous vehicle market, Toyota has been developing Kirobo Mini, a robot that fits in your car’s cup holder, talks, makes gestures and even responds to emotions.

Creating a website used to be, and still is depending how you create it, an expensive and time consuming process. If you didn’t know the programming language, your only option was to hire someone to do it for you. When Wix came along, it provided a platform where anyone could create a website with minimal effort.

PullString Offers a Set of New Tools for Creating Chatbots

It seems as if everyone in IT is talking about chatbots in some form or another, Facebook, Google, and Microsoft to name a few. All this excitement makes chatbots look like a new innovation just conceived in Silicon Valley, but the technology has been around for more than half a century.

Spera Launches Platform to Manage Your Freelance Business But How Does It Differ from the Competition?

Spera, a cloud-based management platform for freelancers, recently announced its launch, in beta. Unlike freelance marketplaces such as UpWork, Freelancer.com or Fiverr, Spera enables the one-third of the U.S.

Can Your Business Make Use of GoPro’s New Karma Drone?

When GoPro (NASDAQ:GPRO) hinted it was in the process of creating its own drone in May of 2015, there were some great expectations, because after all the action cameras it makes are known for their versatility, functionality and reliability. For many outdoor enthusiasts, they were hoping the same features would translate to the drone.