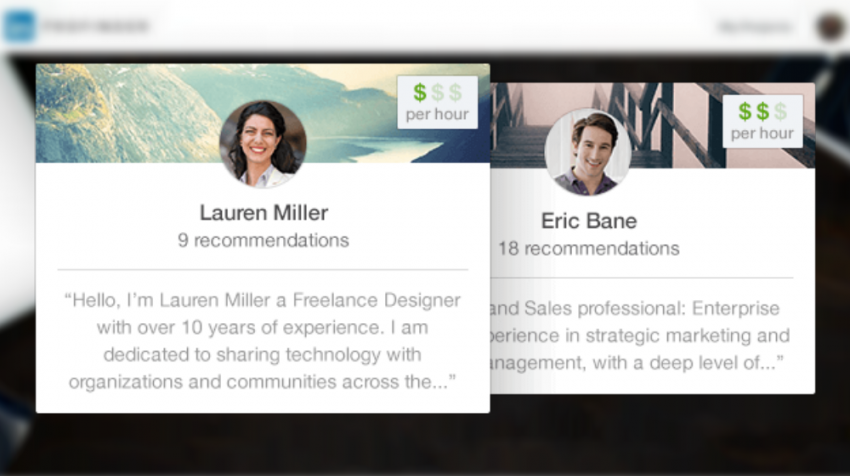 LinkedIn is already the premier social network for business owners and professionals. And now, the platform is adding a new freelance marketplace to help businesses find freelance workers and freelancers find work.

Additionally, Facebook announced a change this week that could make its Messenger app accessible to more consumers around the world. Read about these updates and more in this week’s Small Business Trends news and information roundup.

ProFinder is a new professional services marketplace that LinkedIn (NYSE:LNKD) is piloting across the U.S. It is a “freelancer for hire” site similar to Fiverr, Flexjobs or Upwork, designed to help businesses find local freelance talent.

Small businesses and others seeking a better way to communicate with customers or partners in tech challenged areas should rejoice. Facebook (NASDAQ:FB) has launched lighter version of its Android Messenger app.

During the Great Recession, two federal programs for small business stimulated billions in additional capital and lending, says the U.S. Treasury Department, which had oversight of both. The department today issued program evaluation reports for the State Small Business Credit Initiative (SSBCI) and the Small Business Lending Fund (SBLF).

Apple (NASDAQ:AAPL), which dominates the tech world, has seemingly been dealt a number of blows over the past few months, including several courts cases.

A new study reaffirms small business owners’ optimism, but presents an interesting fact about their hiring plans. According to the latest PNC (NYSE:PNC) Economic Outlook Survey, small businesses are confident about growth, but they don’t want to increase headcount.

Looks like small businesses are on a hiring spree. The ADP Small Business Report for September 2016 has revealed that small businesses created 34,000 jobs in September. ADP (NASDAQ:ADP) defines small businesses as those with 1 to 49 employees. For the survey, it partnered with Moody’s Analytics to provide a monthly snapshot of U.S.

The U.S. added 26,000 franchise jobs in September, new data reveals. According to the ADP National Franchise Report for September 2016, restaurants (up 18,800 jobs) and auto parts and dealers (up 3,500 jobs) saw the most impressive growth.

Creepy Clowns Cause Ronald McDonald to Take a Break (Watch)

Ronald McDonald, the popular McDonald’s mascot, has been making fast food customers smile for the past 50 years. But not all clowns today are looking to make people smile. A series of creepy clown sightings have some communities on edge. Some clowns have made violent threats, chased people to their doors and worse.

Halloween offers many potential advertising opportunities for businesses. You can use the holiday to promote a sale or event. You can show off your festive spirit. Or you can even show off how some of your products might be useful for various Halloween activities.

Halloween is approaching quickly. And for small businesses, that means it’s time to make plans for your Halloween marketing and promotions. There are many different tactics you can use to show off your holiday spirit and to get your customers involved as well. Below are ideas for some online Halloween marketing ideas.

A picture is worth a thousand words, especially when it comes to online shopping. That’s the core finding of a new survey conducted by media technology company, Sticky, a Swedish technology company that has developed a platform for webcam based eye tracking.

It’s easy for Halloween to be left out of your fall marketing plan. After all, many adults think of the holiday as one for kids. And, as a business, you’re busy prepping for the all important Thanksgiving to Christmas shopping season with its Black Friday and Cyber Monday. However, the marketing opportunities provided by Halloween are just too good to pass up.

8 Tips for Retailers When Dealing with the Holiday Labor Shortage

Consumers who have food allergies or sensitivities have a hard enough time finding food items they can safely eat. But now there are apps that can make the process a lot easier. ContentChecked is a small business that develops apps specifically for people with food allergies and sensitivities. Read more about the company in this week’s Small Business Spotlight.

Intuit Has a Brand New Invoicing App for the Self-Employed

Self-employed people make up 10.1 percent of the total US labor force, and according to the US Bureau of Labor Statistics, there were 15 million people classified as self-employed in 2015. This particular demographic includes those  who run their business day-to-day by doing virtually everything themselves, which includes their books.

Mobile money transfer is a steadily growing trend. As smartphones become ubiquitous and more people around the world own other mobile devices like tablets, the potential for mobile point-of-service payments, peer-to-peer payments, loans and other transactions continues to increase.

Samsung just can’t seem to get it right. The tech giant has already experienced a huge PR nightmare due to some of its Galaxy Note 7 phones overheating and even catching fire. But the problems haven’t stopped there. Originally, Samsung claimed that the battery supplier was to blame for the overheating. But since the company switched suppliers, the overheating hasn’t stopped.

With 27 million members and more than 250,000 separate groups, the 14-year-old Meetup is surely a relatively popular online social networking portal that very few people talk about. Placed among the likes of Facebook, Twitter, Instagram and Pinterest, Meetup is practically invisible. For more than a decade, the website has facilitated offline group meetings in various parts of the world.

Chatbots Will Soon Discuss Your Banking Info With You

Text a question like “What’s my credit card debt?” or “How much did I spend on gas this month?” and the friendly answer comes within seconds. “Let’s see,” it begins, before listing the requested information. This is a banking chatbot, a software program that understands and responds to questions and commands about your bank account.

Henry Geddes knows lighting. As the founder of Splashlight, a photography agency based in New York and Miami, he’s spent much of his professional life creating the best possible lighting for fashion photographs and other images. So when he would chat with friends on Skype and other live chatting programs, he really took notice of how big an impact poor lighting could have on the visuals.

Smartphones are key communication tools in the personal and work life of the connected world we now live in. And with every new phone entering the marketplace, more features are added that increase our reliance on these devices.

In the midst of controversy over its troubled Galaxy Note 7 device, Samsung (KRX:005930) is staking claim to another expanding market with business implications, Artificial Intelligence. The company recently announced it is acquiring AI developer Viv Labs in a clear attempt to gain ground on competitors like Apple, Microsoft and Google.

Industrial grade 3D printing has been around for more than 30 years, but recent technological developments now let anyone buy a small 3D printer that essentially turns your desk or workbench into a factory.

Need to Know Something About Google? Now There’s Just One Place to Find It All

There’s never a dull moment at Google (NASDAQ:GOOGL). The search engine giant works on multiple products and services, making it difficult to keep tabs on the latest. To address this problem, Google has now launched a central destination for all the latest news from inside Google, from Android to Translate.

No, It’s Not A Joke! This Sports Car is a Real Life Transformer

Would you believe it? A team of Turkish engineers have finally managed to turn science fiction into reality, producing what’s possibly the first real-life “Transformer” that morphs from a car to a giant robot.