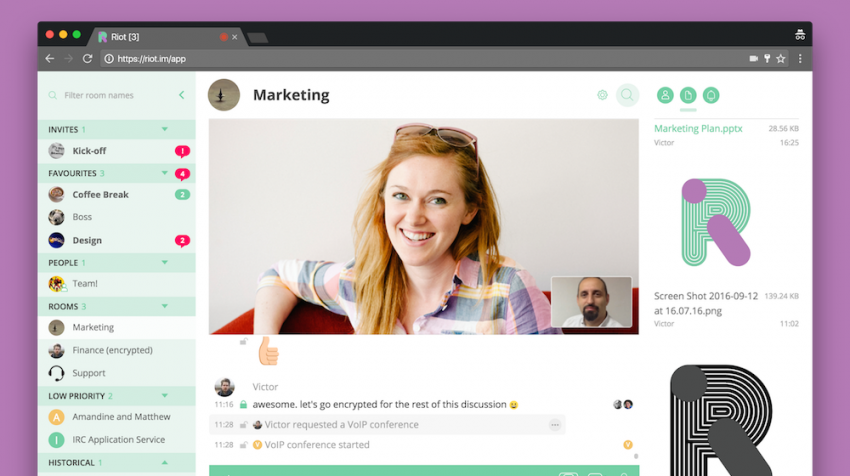 Built around group chatrooms, Riot lets users share messages, images, videos and files, and interact with various tools and platforms under one roof. It provides a single identity and place for all teams to gather to communicate and collaborate on projects without the need to switch between accounts and services.

Riot runs on Matrix, an open-source collaboration platform that facilitates instant messaging, VoIP, and even Internet of Things communication. It bridges to external networks, such as Slack, IRC, Twitter and RSS. Other networks and productivity tools to be added include Skype, Google Hangouts, Basecamp and Microsoft Lync.

Initially built by developers for developers, Riot is free and open source software. It publishes all of the code on GitHub, where anyone can see, modify and run it.

According to Amandine Le Pape, co-founder and head of product, who spoke to Small Business Trends via Skype, the vision behind Riot is two-fold:

Today, email is the only ubiquitous collaboration tool, the Riot announcement claims. Unfortunately, it lacks the features needed to make team communication and collaboration effective. On the other hand, tools that do include functionality such as group chat, bots and voice and video calling are often fragmented and keep users hidden within a silo.

Riot seeks to create a single workspace through which disparate teams can communicate and collaborate regardless of the app or platform in use.

Another aspect of Riot’s vision is to protect data privacy from breaches. It enables users and teams to share their data securely so that no one other than trusted parties can access it, developers claim.

Le Pape summarized the company’s vision for the platform this way:

“Riot gives people the power to choose the messaging app they want to use, the power to use any integration available in an open ecosystem, to encrypt their conversations, to run their own server and fully own their data, to choose how they want to be notified and to innovate on top of an open standard.”

Even small businesses need help communicating, especially when everyone is not at the same location. Employees in different offices or freelancers contracted to work on projects may have their own preference for communication platforms and productivity tools.

The need to switch between tools to suit the needs of each person is not only onerous and time-consuming but makes little sense given that platforms like Riot exist.

While the business owner may wish to encourage the use of a single system — Slack, for example — how much better if everyone could continue using their preferred platform and still collaborate across the board. That’s what Le Pape and Riot’s other founders hope to accomplish.

Riot is available free on the web, in the App Store, on Google Play and from F-Droid. Visit the website to learn more or to sign up.