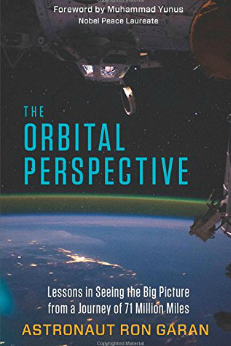 In the book, The Orbital Perspective: Lessons In Seeing the Big Picture From a Journey of 71 Million Miles, a former fighter pilot and astronaut Ron Garan talks about a phenomenon known as the “overview effect,” a shift in perspective that occurs after seeing the Earth from space. This shift led Garan to the idea of “orbital perspective”, a central focus in his book. Using the orbital perspective appropriately, Garan suggests, one can achieve astounding, life-altering results in almost any endeavor including business, technology and solving the world’s most difficult problems.

What is The Orbital Perspective About?

Whether it’s trying to get the next sale, finding the best way to eliminate hunger or getting along with your family, Garan’s book makes the claim that the issue could be one of perspective.  In his book, Garan claims to have developed this perspective after years of working as a fighter pilot, astronaut and entrepreneur. Looking at Earth in the quietness of space, Garan recalls first feeling this connection. He saw the world beyond the ordinary chaos of everyday life and first started to realize that achieving the right perspective can be key to seeing solutions.

Yet coming to this conclusion was not easy, as the first part of The Orbital Perspective attests. At the time, Garan was working at the International Space Station following the end of the Cold War. To say that things were tense and miscommunication was frequent would be an understatement. Yet, the space crew from Russia, America, Japan and many other countries was able to work together to achieve the opportunity of a lifetime.

Garan says that same type of collaboration can be used for success in your business. He shares this process of finding common ground, building mutual understanding, developing elevated empathy and maintaining consistent communication as the key to any successful collaboration effort. In the case of his experience aboard the International Space Station, Garan noted how when members of the crew got bogged down in the day-to-day issues (what Garan calls a “worm’s eye perspective) for too long, they would lose sight of the long-term goal (what Garan calls “the orbital perspective”). Getting to that point where all members can see and work towards that orbital perspective should be the key mission of leadership. Why? Understanding and developing the orbital perspective is the key to long-term survival in a complex and constantly-changing world, Garan says.

A retired colonel with the U.S. Air Force, Garan is now an entrepreneur who specializes in working in international and environmental development. He is also the founder of Fragile Oasis and the Manna Energy Foundation, two organizations dedicated to social enterprise and innovation. He is also one of the only people to have lived 176 days in space and logged 70 million miles in orbit.

What Was Best About The Orbital Perspective?

The best part of the book is Garan’s optimism for the future. Though not overly naive, Garan’s optimism about the future can be compared to that of author Steve Case is his book The Third Wave: An Entrepreneur’s Vision of the Future. The difference between the two is their approach. Case focuses more on the policies and regulations needed to create innovative business solutions, while Garan focuses on the need to use the right perspective, no matter what solution we seek (business or otherwise). This focus on using the appropriate perspective (short-term vs. long-term) for the best results can be really helpful for leadership planning.

Garan does an absolutely incredible job of showing how perspective can influence our results. One example is the story he tells of the 33 Chilean miners trapped but eventually rescued in the Copiapó mining accident of 2010. The miners’ plight and the focus on their rescue would eventually draw international assistance (including NASA support). According to Garan, while initial rescue efforts focused on the short-term goal of getting the miners out as quickly as possible, it was a NASA leader who had pointed out the importance of a more long-term goal, that being getting the miners out alive as soon as possible. This new “orbital perspective” allowed for a timetable that focused on maintaining the miners’ baseline health while working to free them of the collapsed mine.

Why Read The Orbital Perspective?

The Orbital Perspective is a book with an agenda much bigger than attaining business success because Garan’s principles can be applied to every human endeavor. More specifically, the book focuses on leadership and on setting the right perspectives for team members to rally around. It does this by demonstrating how the right long-term and short-term perspectives led to real-world success aboard the International Space Station, in the rescue efforts following the 2010 Copiapó mining accident and in engineering innovations meant to help others in need such as those around the world needing access to fresh water.

The power of the book is in the potential to adapt its principles to such a wide variety of applications. If you are a business leader (or employee) who needs a better approach to meeting your team’s overall mission, The Orbital Perspective might be able to provide the stories and inspiration you need to get started.