Think Technology and Business are Confusing Now? Wait Until The Third Wave

Written by the pioneering former co-founder of AOL,"The Third Wave: An Entrepreneur's Vision of the Future" takes a long-term view at the future of business and the Internet. According to the book, we are nearing the "third wave" of the Internet, a period where the Internet will be embedded in even more devices. Find out how Steve Case says we should prepare based on his personal story of bringing America into the Internet's "first wave". 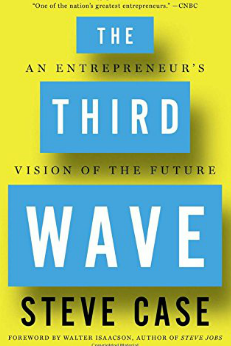 In little less than a decade, we have gone from only using phones to talk to using phones for almost everything- – social media, emails, games, apps, etc. Who could have predicted it?

Yet predicting is the exact thing that business owners are asked to do when planning their business over the long term. If you want your business to survive, it has to capitalize on technology to reach customers and successfully compete.

The Third Wave: An Entrepreneur’s Vision of the Future is the future as imagined by Steve Case, pioneering co-founder of America Online.

What is The Third Wave About?

Technology and business, as Steve Case puts it, have gone through “waves”. The first “wave”, starting in the early 90s, began when the Internet went mainstream. This was the era of dial-up, the golden age of “AOL”, and a little search engine called Google. Business was just starting to go online but hadn’t figured out how to monetize it yet effectively.

The “second wave”, our present era, is the era of apps, social media, and devices that can connect to the internet wherever you go (mobile). It is also the era of tech startups, Google and eCommerce. Businesses start to capitalize and monetize increasing use of the internet. New technologies start — cloud computing, software-as-a-service (SAAS), and Kindle — as more investment and experience pour into areas like Silicon Valley.

The “third wave” is coming up and is the predominant focus of the book.

The “third wave,” as Steve Case predicts along with other experts, will feature even more internet usage on a deeper level. Case expects the world known as the”Internet of Things” to integrate deeper into our lives. More and more things, such as your dishwasher and your toaster, will be connected to the internet. We will be able to accomplish more with less effort (charging a car with your phone, etc.) and get more personalized responses based on computer algorithms. This change in internet usage could also disrupt business as other areas outside of Silicon Valley (and America) and governments get involved.

It is for this world that Steve Case says business leaders need to get ready. Case argues that businesses need to be optimistic about new opportunities, but also cautious of new threats as we progress into the world of the “third wave”.

Case is best known as the co-founder of America Online (AOL). After serving as the CEO and Chairman of AOL, he founded a start-up impact investing firm known as Revolution LLC and serves as chairman of Up Global, a nonprofit that supports entrepreneurs among other national initiatives aimed at spurring entrepreneurial innovation.

What Was Best About The Third Wave?

The best part of The Third Wave is the additional entrepreneurial insight Case gives to the Internet of Things. Many books have been written on the increasing use of the internet in everyday lives, but they don’t offer the unique advice that Case provides.

For example, The Third Wave discusses governmental regulations, something a business owner might not consider while creating their business. Case doesn’t take a stake on one side (pro-business or pro-government). He argues that we need both government (to set regulations) and business (to spur innovation) and stresses the need to leverage both in long-term planning.

The Third Wave does an excellent job of outlining the different potential futures of business in the “third wave,” but it doesn’t provide a lot of specific applications for the business owner. The book’s focus is on laying out where the internet has been and where it could go from a business perspective.

This isn’t a bad thing, but it is something to be aware of. The Third Wave suggests the mindset one needs to prepare for the future, but it doesn’t give the final answers for dealing with that future.

Why Read The Third Wave?

If you are a business leader intrigued about the impact technology could have on your business, The Third Wave provides a unique story written by one of the pioneers of the internet (the guy responsible for those AOL CDs). The author’s perspective in this book is demonstrated through his telling of his own story at AOL and his insightful predictions on the future of technology. This book won’t provide you specific answers on every little detail in the upcoming phase of technology and business, but it sets out some general principles to be aware of so your business can adapt now rather than later.

Charles Franklin is a Book Reviewer for Small Business Trends. He has a background as a professional reviewer, and is also a content provider and customer relations professional.
One Reaction
Subscribe
Follow @smallbiztrends
RSS LinkedIn Pinterest iTunes