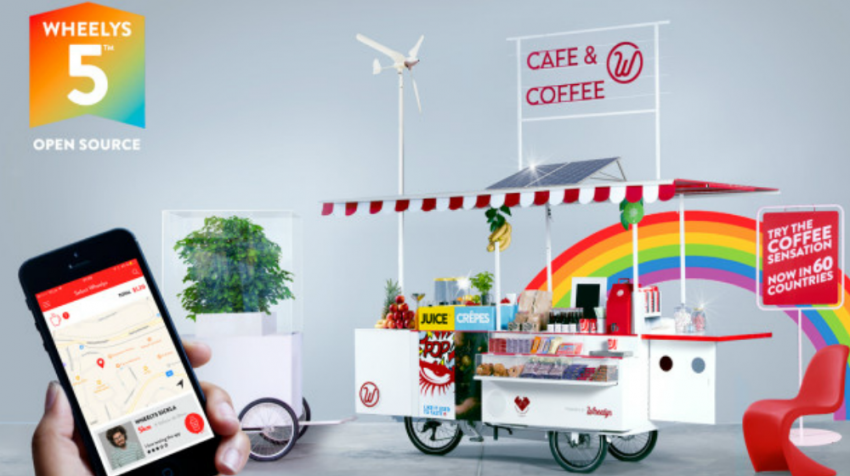 Wheelys, the green low-cost franchise featuring a full-service coffee shop and restaurant on a bicycle, has a new version out. The company recently launched a new bike cart called the Wheelys Cafe 5 Open Source.  You can not only offer coffee, but also juice, ice cream and other snacks.  The new cafe is versatile enough to expand your offerings.

With over 550 bicycle carts and quasi-employees, the Swedish-based franchise is quickly becoming one of the world’s fastest growing café chains. It is a simple way to open a coffee shop. The company is now in 65 countries, with more locations than even Starbucks.

“This is the biggest invention in mobile food since some Greek invented the wine bottle,” the company states on its Indiegogo campaign page. The company says it is “a full service, high tech mobile kitchen, with running water, refrigeration, integrated tablets, and everything you need to make the world’s best coffee. AND more.”

Here’s a look at the new Wheelys:

Of course, all the improvements come at a price.  The new Wheelys Cafe is a bit more expensive than earlier versions.

However, at $5,900, it is still far cheaper than owning a brick and mortar cafe. More importantly, since it’s a bike cart, you can choose to set up whenever and wherever you want.

The only ongoing cost is the $199 monthly franchise fee. That fee covers a range of benefits, including discounted supplies, support, branding, advertising and workshops, among other things.

A Look at the Latest Wheelys Cafe Cart

It’s a new and better version, the company says. The tricycle is powered by sun and sweat and it is optimized for all things caffeinated. The Wheelys 5 Open Source has all the conveniences: WiFi, running water, an air purifier, LED lighting, a roof, a sink, smart displays, an electric motor, solar power, a sign, a gas stove, espresso brewer and a speaker for tunes. The stove uses bio-gas. And of course, the coffee grounds are recyclable into soil cubes. All this gear means that you can now serve juice, coffee or pastries come rain or shine. 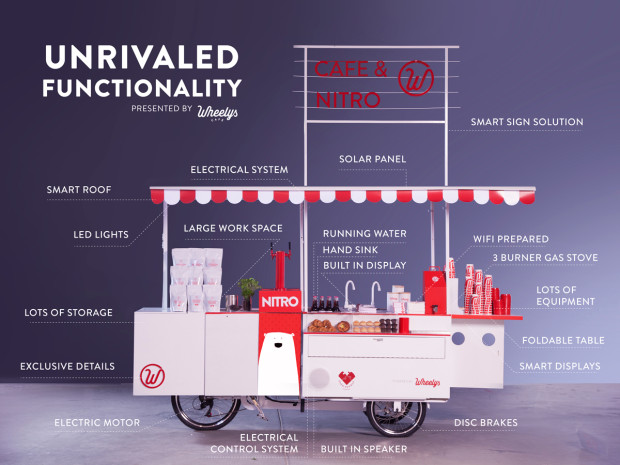 According to Wheelys, running the tricycle is hard work. “You need to get up in the morning and brew that coffee. You need to build habits for the customers. You need to care for your relations, and sometimes bike home in the rain. It is hard, but if you have the will, we have 200 people that will tell you it is the best living in the world. You are the boss, you work when you want.”