The 5 Most Stubborn Excuses Killing Your Entrepreneurial Dreams 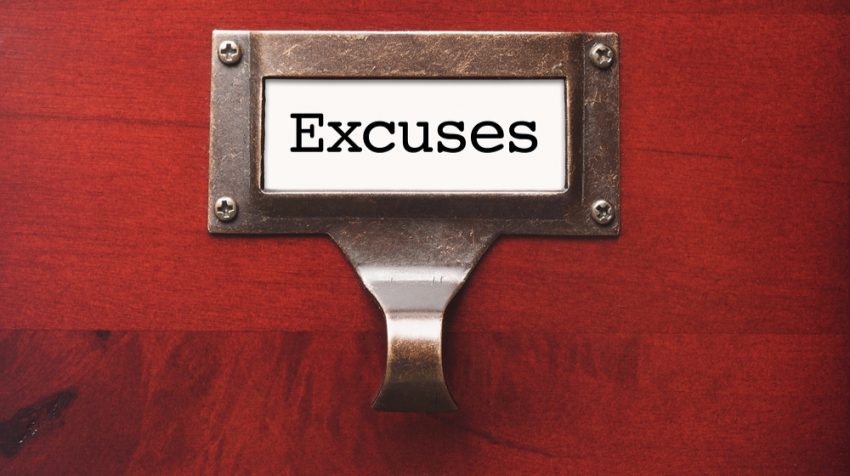 Have you always wanted to be an entrepreneur, but never found the gumption to actually take the plunge and make that dream a reality? If so, the idea of working for somebody else for the rest of your life isn’t likely all that appealing.

On the other hand, the idea of jumping all in seems just a little too risky. The “what if’s?” plague you night and day until you finally give up and resign yourself to the life you’re already living. Perhaps you’ll find a new job and that’ll fill that hole in your heart somehow?

But it doesn’t — rinse, repeat, recycle. Life goes on — miserably!

So many people fall into this trap, talking themselves out of starting their own business. Millions of thoughts ramble around in their head, and the positives of what could be always seem to get drowned out by incessant “what ifs” and “I can’t becauses”.

It’s all about excuses though. What you really think is a good reason can usually be boiled down to fear of the unknown and the perpetual justifications for why you can’t get it done.

Here’s five very stubborn, and all-too-common excuses most would-be entrepreneurs use to talk themselves out of following their passion, each and every time:

Yes, eight out of ten businesses will indeed fail within the first year. Another fifty-odd percent that are left over will end up failing within the four years that follow. What are you gonna do? You don’t want to be a follower in life — so stop following! Businesses mostly fail because of poor management, rarely because of bad ideas. Even if you have a bad idea, you can always move on and try another one. Let the excitement of the chase drive you, rather than the fear of failure

3. It Costs Too Much, I Don’t Have Any Money

You cry poor. Then you cry, cry, cry again. It also costs millions to travel the world, yet thousands of poor people do it every year. This excuse does have some definite bearing though. Unless you want to start one of these businesses for less than $1000, you will need enough money to live on for at least a year, some experts recommend eighteen months. So, you will need some money to tide you over, if you’re quitting your job. Nobody’s saying you have to quit your job to start your business though. You can moonlight until it starts to gain some traction if that makes you more comfortable.

4. People Don’t See Me as an Entrepreneur

Or “I don’t see myself as an entrepreneur.” So, what are you then? Do you give off more of a janitorial or construction worker vibe? Perhaps you look like the perfect housekeeper? This is perhaps the most ridiculous on the list of stubborn and damning excuses. Get over it!

5. It Seems Like it Would be Just to Hard to Build a Business from the Ground Up

It could in fact be the hardest thing you’ve ever done. But, to quote legendary speaker, Les Brown: “If you do what is easy, your life will be HARD.” Think about how much the people around you are struggling month in, month out. They’re struggling because they hate their life and probably don’t make enough money to live the way they want to. That’s hard. Starting a business will have its struggles; it also comes with rewards after you’ve had a chance to enrich people’s lives while having the ultimate control over how much money you make.

Benjamin Franklin said “He who’s good at making excuses is rarely good at anything else.” While this might sound a bit harsh, the great thing about those who choose to give up on a life of excuses and put in the effort required to turn their lives around can become good at doing a lot of things. Most importantly, living their life with passion. You can live your life the way you want to.

What are — or were — your excuses that kill — or killed — your entrepreneurial dreams?