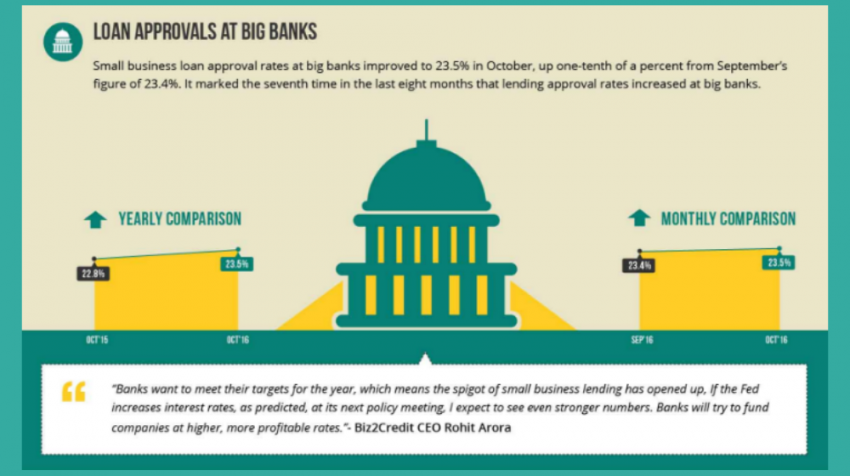 Lending to small businesses from big banks ( those with $10 billion or more in assets) and institutional lennders continues to climb according to a recently released Biz2Credit Small Business Lending Index report for October.

“Banks want to meet their targets for the year, which means the spigot of small business lending has opened up,” CEO and co-founder of Biz2Credit Rohit Arora said in a press release.

Loan approval rates by Institutional lenders also increased by 63.1 percent. This is the fourth month that we are seeing an increase in approval from this quota.

“Institutional lenders are taking advantage of their ability to process loans quickly at very affordable rates,” said Arora. “They are faster and more efficient than other categories of lenders. Quite a few of them are foreign-based investors who are nervous about Brexit and hungry for high yields and low default rates.”

Meanwhile, lending approval rates at small banks remained flat at 48.7 percent in October. Reason: “Small banks are seeking increase in number of closed deals by offering SBA loans. They are feeling the pressure of the increased activity by big banks and institutional lenders, who are strong competitors,” said Arora.

If you are looking to borrow some money for your business, then you know which lenders to target. Figures never lie.