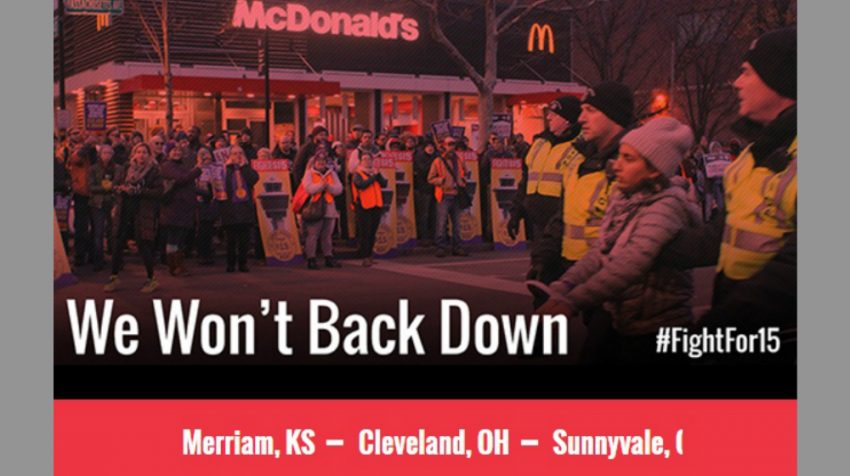 A national “Fight for $15” protest Nov. 29, that had many taking to the streets, found many commenting on Twitter as well. The national protest day saw workers from fast-food chains, airports, retail stores and other industries participating in a union-backed strike to rally for higher wages, union rights and immigration reform. Uber drivers in more than two dozen cities also joined in. This despite the fact they are independent contractors, not employees.

Labeled a “day of disruption,” Tuesday’s demonstrations were scheduled to take place in 340 cities and nearly 20 of the nation’s busiest airports, Reuters reported.

“Fight for $15” started four years ago with a few hundred fast food workers in New York City. Since then, the protest has spread globally and encompassed industries that include fast food, airport service, child care, retail and higher education. The movement’s organizers are backed by the Service Employees International Union.

The organization explains its activist rationale by saying “For too long, McDonald’s and low-wage employers have made billions of dollars in profit and pushed off costs onto taxpayers while leaving people like us — the people who do the real work — to struggle to survive. That’s why we strike.”

Protesters have tended to view franchise brands like McDonald’s as a monolithic corporation rather than as a community of small business owners. These businesses owners too must struggle with limited resources and rising costs to keep their businesses going.

As might be expected, reactions surrounding the push for a minimum wage are strong and represent both sides of the issue. Many have taken to Twitter to express their approval or disdain:

There isn’t a single state where minimum wage workers earning $7.25 an hour can afford to rent an apartment. We need to #FightFor15!

See Also: Improving Your Customer Survey Responses Doesn't Have to Be Hard, Read These 15 Tips

While workers are out in force today vying for an increase in the minimum wage, the reality is that many companies simply cannot meet their demands.

For example, McDonald’s, a company under fire by Fight for $15, could face a drastic reduction of its workforce.

Ed Rensi, former president and chief executive officer of McDonald’s USA, writing for Forbes, said the wage increase would result in “wiping out thousands of entry-level opportunities for people without many other options.”

He added that that the 90 percent of McDonalds’ restaurants owned by independent franchisees, which make roughly 6 cents in profit for every dollar spent by consumers, could see their profit margin drop to zero.

Add to that the fact that millions of small businesses may also be forced to either raise prices, lay off employees or go out of business altogether.

Many in support of these businesses and opposing a drastically increased minimum wage as the only answer were also out  tweeting in force:

Something tells me these guys will work for much less. #Fightfor15 pic.twitter.com/0UQQ1K3nYa

The whole #Fightfor15 movement is based on laziness and entitlement.
Get educated, work hard, and #Earn15 instead!!

Tom Rogan, a domestic policy columnist for news organization Opportunity Lives, writing for Forbes, said the Fight for $15 movement is actually hurting the very people it claims to defend, explaining:

“The true victim of the ‘Fight for $15’ is always going to be the lowest-skilled workers. This is the ultimate failing of minimum wage laws. By imposing unaffordable costs on employers, they force employers to discard their least productive employees. And those employees are the ones who need to get a foot on the economic ladder, and the skills to earn higher wages.”