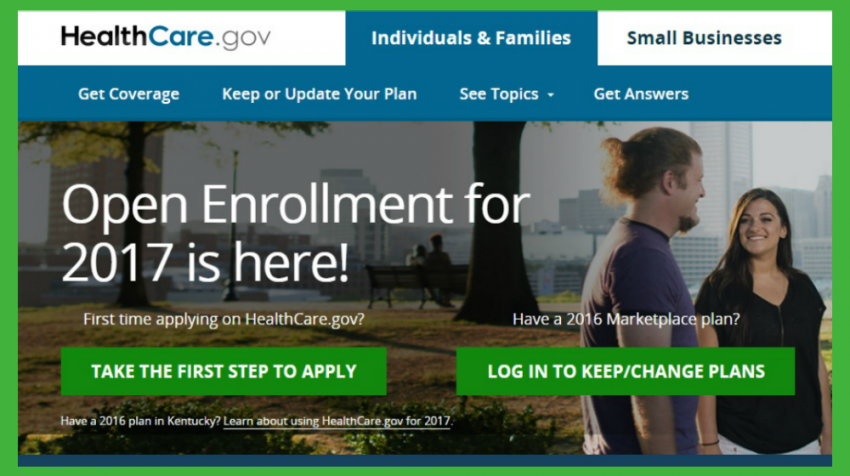 Open enrollment for individuals and families wanting to apply for health insurance through Obamacare starts today. Depending on where you live, you can either go to Healthcare.gov or your state’s healthcare exchange website. Self-employed businesses and solopreneurs with no employees  should also use this option. (Companies with employees have a different option available, as shown below.)

Here are some basic facts regarding enrollment:

The 2017 enrollment holds substantial rate hikes for most Americans, an average of 25 percent on benchmark Silver plans, according to the federal government.

Some states — Alabama, Arizona, Minnesota, Pennsylvania and Oklahoma specifically — can expect increases of more than 50 percent (based on on 40-year-old non-smoker making $30,000 per year). Persons living in Phoenix, Arizona, for example, can expect to see a 145 percent increase.

The reasons for such a tremendous rise are two-fold. First, persons enrolling in Obamacare were much sicker than expected, which caused a domino effect among insurers.

Second, participating insurers lost millions due to the high cost of coverage. As a result, some, such as Aetna, Humana, UnitedHealthcare and Blue Cross Blue Shield, have dropped out in many states, leading to fewer choices and higher premiums.

Data from the Kaiser Family Foundation showed that 57 percent of exchange enrollees would have a selection of three or more plans for 2017, down from 85 percent in 2016. Some states — Alabama, Oklahoma and South Carolina, for example — only have one insurer from which to choose. Overall, 32 percent of counties will have one exchange insurer in 2017, compared to seven percent in 2016. 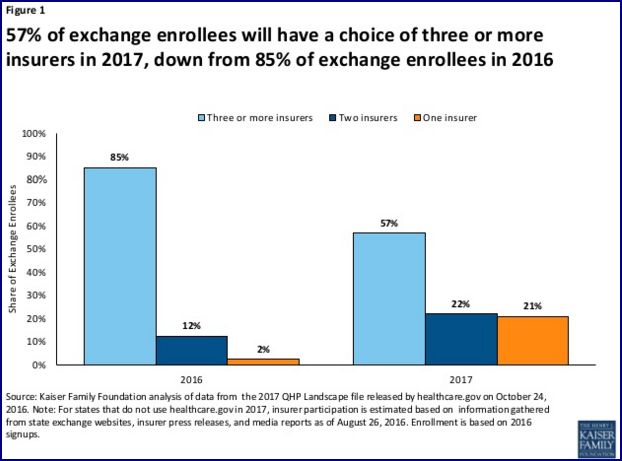 That said, several states will see marginal increases (less than ten percent) and a few — Indiana, Ohio and Rhode Island — will see their rates drop, though only between one and four percent.

If you are self-employed, you can use the individual and family health insurance marketplace to enroll in coverage, since that may be the best option for people who run their own businesses. That includes freelancers, consultants, independent contractors or other self-employed workers who have no employees.

When you fill out a Marketplace application, you will find out if you qualify for premium tax credits and other health plan savings. This will be based on your income and household size. You will also determine if you qualify for free or low-cost coverage through the Medicaid and CHIP programs in your state. This, too, depends on your income, household size and other factors.

When you fill out the application, you’ll have to estimate your net self-employment income. The Marketplace bases savings on your estimated net revenue for the year you’re getting coverage, not last year’s income.

If you qualify for a subsidy (87 percent did in 2015) and you’re willing to switch plans, you won’t be subject to the big increases. In most states, anyone making less than 400 percent of the Federal Poverty Level ($24,300 for a four-person household) can get a subsidy on Marketplace plans.

Still, many small business owners will not qualify for subsidies and be forced to either pay hundreds or even thousands in monthly premiums or opt out and pay a substantial penalty come tax time.

If your business has from one to 50 full-time employees (other than yourself, a spouse, family member or owner), you can use the Small Business Health Options (SHOP) Marketplace to offer health and dental coverage for yourself and your employees. Unlike the individual and family marketplace, enrollment for the SHOP program is open throughout the year.

(It is unclear if the SHOP Marketplace will be subject to the same premium increases as the individual and family plans. Browse the plans available in your state to get an idea of cost.)

Employers can use SHOP to apply for tax credits, which lower their share of employee premiums. Also, cost assistance is available for small businesses with less than 25 full-time equivalent employees.

Obamacare does not require companies with 50 or fewer employees to offer healthcare, and many have chosen to drop coverage entirely. For smaller companies not inclined to offer or continue coverage, employees can enroll in the individual exchanges. Many may qualify for subsidies, to offset the cost.

Paul Chaney is a Staff Writer for Small Business Trends. He covers industry news, including interviews with executives and industry leaders about the products, services and trends affecting small businesses, drawing on his 20 years of marketing knowledge. Formerly, he was editor of Web Marketing Today and a contributing editor for Practical Ecommerce.
5 Reactions
Subscribe
Follow @smallbiztrends
RSS LinkedIn Pinterest iTunes