Streaming, Sharing, Stealing: Why a Data-Driven David Can Beat a Creative Industry Goliath 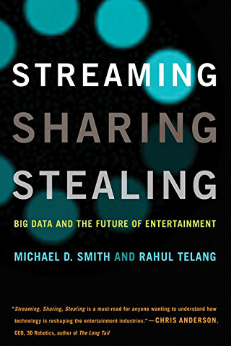 Why do Hollywood executives with millions of dollars scramble to make a hit while a former DVD rental service business (aka Netflix) is able to rake in millions? Streaming, Sharing, Stealing: Big Data and the Future of Entertainment explores the impact and power of Big Data and information on the creative industry (movies, books, music). The authors argue that technology has changed the game when it comes to entertainment. New business approaches (long-tail vs blockbuster) and ways of interacting with customers (analytics) have arrived. Those who want to win (regardless of their budget) need to adapt to survive.

What is Streaming, Sharing, Stealing About?

As can be expected, Streaming, Sharing, Stealing begins with the story of Netflix, but the focus isn’t how Netflix beat Blockbuster at its own game. The focus, instead, is how Netflix successfully beat the TV industry at its own game with the production of “House of the Cards”, a wildly successful show that TV executives decided to take a pass on. In the process of producing the show, Netflix was able to shatter some age-old practices of the entertainment industry and make a huge profit in the process.

Those rules were:
1. Don’t release all of your content on the same day. Netflix made the entire season available at once.
2. Don’t pay in advance for a show because you won’t be able to recoup your investment. Netflix paid for the entire season.
3. Rely on third-party distributors to get your data. Netflix had its own unique customer data.

Netflix’s focus on customer data gave the company the leverage to make bold moves. Netflix management had detailed statistics on their customers. They not only knew what their customers liked to watch. They knew how long they liked to watch a show. They could predict, with a high degree of accuracy, which shows their customers would watch next. As a result, Netflix was able to successfully experiment and adapt to the needs of a constantly changing market, something that has made the company a household name and industry power player.

This is the world where customer data is king. This world, the book demonstrates, with diverse examples from baseball teams to telephone books, is the key to the future of almost every business. Knowing how to deal with the good parts (customer data) and the unexpected competition (like piracy) is the key to survival.

Michael D. Smith and Rahul Telang are professors at Carnegie Mellon University and co-creators of the Initiative for Digital Entertainment Analytics (IDEA), a research-based think tank that explores the impact of technology on the entertainment industry.

What Was Best About Streaming, Sharing, Stealing?

The best part of Streaming, Sharing, Stealing is the variety of approaches the book takes on technology and entertainment. Many books are content to stick with the “Netflix and Amazon won, so everyone else is doomed” message. This book, however, gives a more nuanced answer. Yes, the book suggests, companies like Netflix and Amazon have a competitive advantage right now, but other companies can join in with the right mindset and tools. That mindset includes a desire to learn a deeper understanding of how technology impacts business. It’s something the book covers from different angles (piracy, pricing and consumer psychology).

While Streaming, Sharing, Stealing does present a variety of perspectives on technology and the creative industries, there are some important areas that needed some attention. One of those topics is privacy. While praising Amazon’s and Netflix’s use of customer analytics, there is little discussion about the limits and ethics of using such data. As shown in other books on Big Data, just because a customer clicks on a product or service doesn’t mean that customer is comfortable with others knowing the details.

Streaming, Sharing, Stealing is best suited for business owners — particularly those who produce creative work like books, music, art, or movies. It’s also suited for those who want more discussion about the impact of technology on business. The book also deals with the potential power of data along with the potential abuses of that data. The book won’t provide all of the specific tools a business leader will need to have a competitive advantage in this area. The book will however, provide the basic principles that can help a business develop a more competitive advantage in this area.