10 Classic Business Movies to Watch Over the Holidays 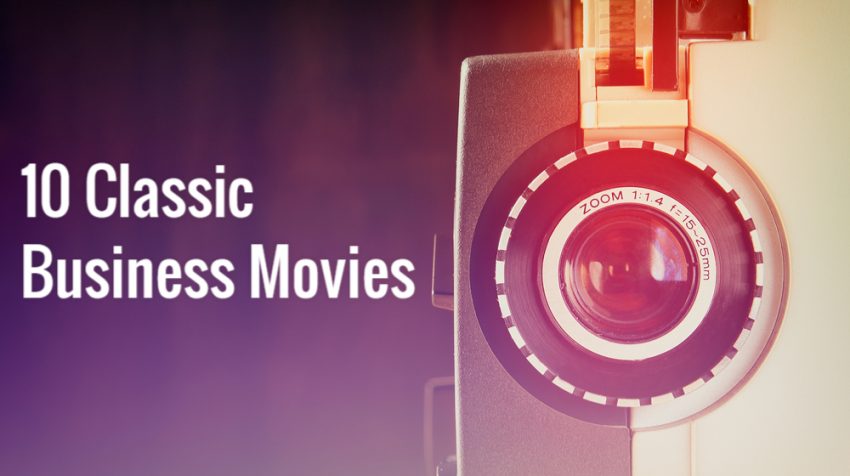 The holiday season is the perfect time to relax and watch a movie — even if you’re a busy entrepreneur.  So if you find yourself with any extra time on your hands over the next couple of days, why not enjoy a film with some useful business themes? The following 10 business movies could be especially of interest to entrepreneurs over the holidays.

Business Movies to Watch During the Holidays

How to Succeed in Business

Robert Morse, who most recently starred in the popular drama Mad Men about Madison Avenue’s golden age, stars as an ambitious window washer who rises through the ranks to become the head of the World-Wide Wicket Company.

Jam packed with zany antics and lively musical numbers, How to Succeed in Business is one part satire, one part business success story. OK, this movie isn’t exactly meant as serious business advice. But as a feel-good aspirational romp, it may just capture your heart.

Robert Preston plays a salesman who sets out convince the good people of River City, Iowa to purchase instruments, uniforms and music books for the town’s boys band. Only one trouble with that. The town doesn’t have one!

So now the enterprising hero in The Music Man must now sell the idea of creating such a band too. And first he must create an urgent need for what he’s selling. You won’t believe what Preston’s character, Prof. Harold Hill a.k.a. “the music man” does next.  Of course, this might not be the way your business goes about making a sale, but, hey, it’s all in good fun. Enjoy!

The title may suggest this movie is mostly about email. And it is — sorta. But a subplot of this classic romance also deals with the competition between a small neighborhood business and a big box store.

In this respect, You’ve Got Mail is a classic David and Goliath story in which a small book store, operated by Meg Ryan, faces a mega retailer operated by Tom Hanks. Unfortunately in this story, Goliath wins. But don’t think that means this film is lacking a great small business lesson.

The movie is all about the passion it takes to keep a small business going — even against impossible odds. And it’s also about the need to make choices in your life regarding what you really want. Those are certainly lessons any small business owner should be able to understand.

This Bing Crosby musical juggles a bunch of themes most small business owners and entrepreneurs should find familiar. They include the importance of innovation, of pursuing big prospects and of leveraging customer testimonials to make even more sales. In Emperor Waltz, an enterprising traveling salesman (played by Crosby) get’s his foot in the proverbial door with the Emperor Franz Joseph of Austria.

The plan is to sell the monarch a disruptive new product — the gramaphone. The hope is that this one sale will lead to others among Europe’s royal elite.  Of  course, there are some complications along the way. You may not be trying to sell your product to royalty but this movie will still make you smile.

This film adaptation of Ayn Rand’s classic novel stars film icon Gary Cooper and should be a must see for any entrepreneur struggling to stay true to a vision.

In The Fountainhead, Cooper plays Howard Roark, an entrepreneur who refuses to compromise his designs for his clients. His unconventional approach certainly looses him lucrative contracts in the short term.

But eventually those who admire his work seek him out and Roark soon has no trouble finding clients. The story is a good reminder that sometimes it’s a bad idea to cater to everyone. Instead, create a unique vision for your business and your clients will come to you!

In 9 to 5, Dabney Coleman plays an obnoxious and exploitive boss who threatens and harasses his employees even as he takes credit for their ideas.

The movie should serve as a cautionary tale for any boss or other business leader who plans to mistreat or neglect the team that gives them the support critical support day in and day out.

In the movie, Coleman’s character eventually becomes so toxic that his team, played by Jane Fonda, Lily Tomlin and Dolly Parton decide to get rid of him — with hilarious results.

Desk Set is a romantic comedy starring Spencer Tracy and Katharine Hepburn. But the movie also has another plot about automation.

The employees at a fictitious TV network  become convinced that a new computer system installed at work is going to systematically replace them and take all their jobs.

But a computer analyst soon convinces them that the system has been installed not to replace them but to free them up for more important tasks. The movie explains how business automation need not be feared but can sometimes be a great way to improve efficiency. It’s also very entertaining comedy.

Holiday Inn may be one of the most cherished holiday film classics in decades. But did you know it can also be viewed as a great story about niche marketing, branding and the development of a lifestyle business? When Jim Hardy, a sing and dance man played by Bing Crosby, finds the never ending grind of show business intolerable he does something about it.

See Also: What is Return on Kindness and Why is it Important to Your Small Business?

Hardy develops the ultimate business niche, a night club only open on holidays. The idea is to create a slower pace where he can create shows for an appreciative audience and still take it easy the rest of the year.

But his winning brand soon attracts Hollywood and the possibility of being thrown back into the same old grind he left behind. Instead, Hardy fights for the lifestyle he wants no matter what lucrative rewards Hollywood might offer.

This Bollywood-style romantic comedy follows the relationship between a young woman helping to run her family business and an American real estate entrepreneur whose family is building a luxury hotel in her native India.

Bride and Prejudice is a re-imagining of a classic novel by Jane Austen. But it introduces subplots about the importance of understanding the culture in which you are doing business.

International film star Aishwarya Rai plays a woman who must teach an American entrepreneur the importance of respecting the culture and values of the country where he has decided to operate. Of course, the film has plenty of show stopping numbers that make it well worth watching too.

Finally, Mr. Blandings Builds His Dreamhouse is the story of a New York City advertising executive who decides to build a home in the country for his family.

The movie tells the story of Jim Blandings, played by Cary Grant, who believes the hype around building a home in the country only to discover it’s not all it’s cracked up to be.

Contracting bills mount, his daily commute is a nightmare and he feels as if he barely sees his family. On one hand, the movie is a commentary on the same advertising Blandings creates for his customers. On the other, in the end Blandings gets the home he’s always wanted showing that perseverance and following one’s dreams are often rewarded.