Now What? CEO Asks Users How to Improve Twitter 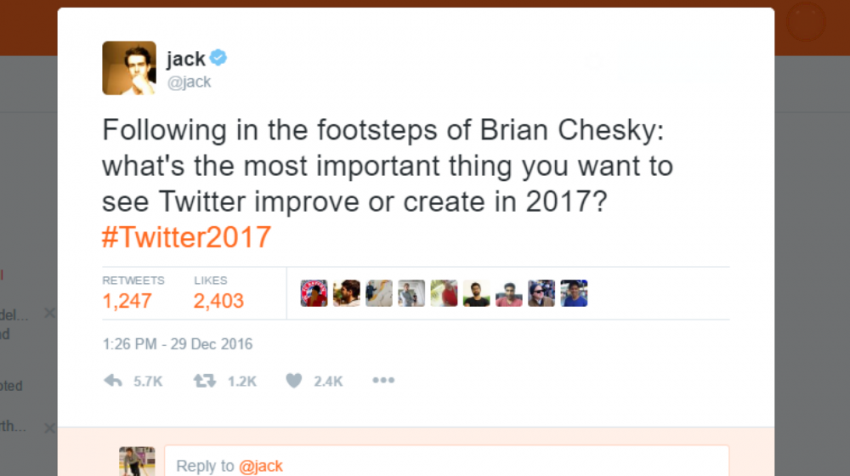 Has the future of Twitter (NYSE:TWTR) come down to this — asking users for ideas on how to grow?

It seems so. On Thursday, Twitter CEO and co-founder Jack Dorsey took to the site soliciting ideas for Twitter’s future.

Following in the footsteps of Brian Chesky: what’s the most important thing you want to see Twitter improve or create in 2017? #Twitter2017

Dorsey is talking about a tweet sent by Airbnb co-founder Brian Chesky on Dec. 26. In that tweet, Chesky essentially asks the same thing.

If @Airbnb could launch anything in 2017, what would it be?

OK, asking for feedback from users isn’t exactly unheard of, especially in the world of online startups where entrepreneurs see it as a virtue. But this hasn’t exactly been a banner year for Twitter — or couple of years for that matter! .

In fact, his was supposed to be the whole reason for putting Dorsey back at the helm of Twitter permanently.

So, under the #Twitter2017 hashtag, Dorsey shouldn’t have been surprised to see this …

Since Dorsey’s return, Twitter has suffered declining stock prices and declining revenues despite ongoing efforts to monetize the platform. And don’t forget the launch of Twitter Moments unlikely to be of much use to Twitter’s core community of small business entrepreneurs, social influencers and thought leaders.

Then, of course, remember the promised innovations and tweaks that never seemed to come off as announced.  Twitter also allowed Vine to wither and die. Arguably one of its most trendsetting and promising technologies, Vine was shuttered with almost no effort introduce new features or monetize.

Some users were able to get past the company issues and talk about the site and how it works or doesn’t work for them.

The ability to edit tweets is apparently something a lot of users want. One observes:

I think every twitter user out there can agree the one and only most important change we want is the ability to edit tweets! #Twitter2017

And this user wants to be able to search tweets that he’s already sent.

Several times i suggest to consider adding a searching engine option to search within my own tweets. At least say “Rejected”#Twitter2017

What about the 140 character limit? It’s not fair when a link you’re including takes more than half that, as these users observe.

Web links should be exempted from the 140 characters. Also, add-in ability to schedule tweets on the default Twitter iOS app. #Twitter2017 https://t.co/8UWrpL1Q85

Others suggested small but important tweaks.

It’s also good to know there are Twitter purists out there. But if this version of Twitter is only working for a few users and it’s failing to make money, it seems this user is going to be disappointed in the long run:

My #Twitter2017 predictions will be to expect much of the same… it should just focus on what’s it’s best at connecting people IMO ?