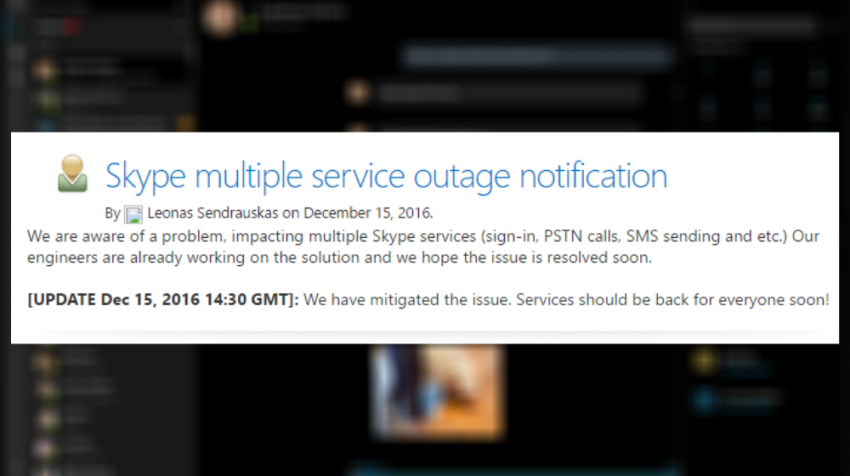 Skype is one of the most popular tools for small businesses that need to communicate with remote workers, clients or others via video and voice chat. But the service experienced a global outage earlier this week, delaying some small business communications.

In addition, Web.com and other small business service providers also made headlines this week. Read on for more in this week’s Small Business Trends news and information roundup.

Skype, Microsoft’s phone, chat and video conferencing service, experienced an outage this morning across parts of North and South America, the U.K., Europe and eastern Asia. But the platforms management team reported the Skype outage resolved within hours. An official announcement on Skype’s website confirmed reports.

The new year is a time for resolutions and changes. And as such, it could be the perfect opportunity for you to upgrade some of the tech tools you use to run your small business. From computers and general office supplies to smartphones and mobile tech tools, there are plenty of new tech devices that could help you run your business more efficiently in 2017.

Got an iPhone 6 Plus with ‘Touch Disease’? Apple Launches Program to Help Fix That

Apple Inc. (NASDAQ: AAPL) recently acknowledged that some iPhone 6 Plus devices may actually exhibit ‘Touch Disease’ symptoms, and has rolled out a program to help fix the “disease.”

What would you think if you got a package delivered to your front door by a robotic dog? Today, you’d probably be fairly shocked. But in the not-too-distant future, this could be a commonplace occurrence. Google’s Boston Dynamics has created a robot named Spot Mini that it thinks could potentially get the job done.

Move Over Keurig, Spinn Has A New Coffee Solution for The Office

A perfect cup of coffee can lift moods, improve concentration at work and evoke interesting conversations. But coffee doesn’t always taste perfect, especially when it’s out of a vending machine at work. A company is now attempting to change that. The Spinn coffee machines are revolutionizing the way a cup of coffee is made.

Small businesses supported Donald Trump throughout his presidential campaign. And the support seems to continue with an upbeat attitude by the majority of small business owners after Trump’s win in the November 2016 election. A new study has found small businesses’ optimism improved to its highest level in eight years after the 2016 presidential election.

Back in August, the Obama Administration proposed new regulations that would allow some foreign entrepreneurs to stay in the United States to build their companies. While President-Elect Trump’s anti-immigrant rhetoric has some worried that he will reverse this directive, I believe that Mr. Trump will keep this rule. To explain why, let me start by summarizing the rule.

Small businesses will soon again be able to make tax deductible contributions to the their employees’ healthcare after Obamacare restricted the procedure. That’s thanks to the 21st Century Cures Act, which was unanimously passed by the Senate. A small, but significant, part of the bill has to do with Healthcare Reimbursement Arrangements (HRAs).

Bill Gates and some other big name investors want to increase risk taking in the green technology market. Of course, risks are a part of almost any business venture. But when it comes to new and innovative areas like green tech, it’s even more necessary to take risks in order to actually move projects forward.

Here’s a good reason to pay extra attention to your online reputation. According to a new survey, 84 percent of customers trust online reviews as a personal recommendation. What’s more, 74 percent of online customers say positive reviews make them trust a local business more.

You might think that there’s no way to update the ice cream shop business. But Sub Zero Ice Cream is trying to change that. You can read all about how the business is changing the ice cream game in this week’s Small Business Spotlight.

Facebook (NASDAQ: FB) is fixing some metrics errors to provide content publishers an improved experience. In a recent post, the social networking giant explained the glitches and steps it has taken to fix them. Here’s a quick overview of the updates Facebook has shared with its users.

Freelancer.com (ASX:FLN) has just increased its reach. The popular freelancing and crowdsourcing marketplace just announced that it is has acquired two major competitors in the Latin American, Spanish and Portuguese markets — Spanish competitor Nubelo and Portuguese competitor Prolancer.

When you’re a parent, fun nights out can be extremely few and far between. It usually takes days of meticulous planning and maneuvering — which is why having a babysitter cancel on you at the last possible second is such an utterly soul-destroying experience. Entrepreneurs Kasey Edwards and Becka Klauber Richter have set out to ensure this never happens to parents again.