Hard Sell: Chairlifts to Customers Already on a Higher Plain 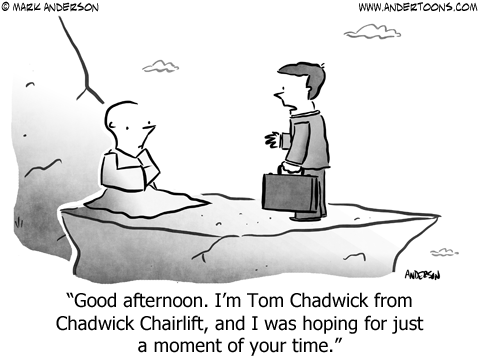 This cartoon was one of those that sort of wrote itself. I thought of a guru on a mountain and the idea of someone trying sell him on putting in a chairlift was a natural fit. Done and done. Or so I thought.

Getting the name of the guy and his company proved maddening. Finding just the right combination of everyday banality, alliteration, and word order took me forever. It’s one of those things that once you start thinking about, it’s difficult to let go.

I knew I had it, though, when I showed it to my wife later that evening. “Love the name!” she said and I could finally stop turning it over and over in my head.