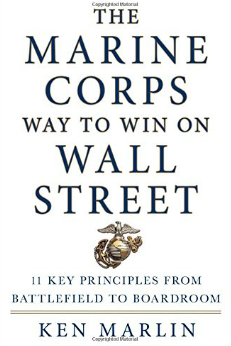 The Marine Corps Way to Win on Wall Street: 11 Key Principles from Battlefield to Boardroom is a book that takes a look at business from the point of view of an ex-marine Marine turned Wall Street insider.

Guided by values he learned from the military, Marlin was able to create that bank and advisory firm. In his new role, Marlin’s academic training, corporate banking experience and decade of military service found a good fit. Wall Street was entering a difficult and chaotic period and needed a person who could keep a clear head during mergers, acquisitions, selling a business and more.The wisdom gained from those experiences became the stories and lessons in his book, The Marine Corps Way to Win on Wall Street.

Marlin is the founder and managing partner of Marlin and Associates, a boutique investment bank and advisory firm. His goal with the company was to create a business that exemplified the values he admired in the military. He served for 10 years in the Marines as a captain and infantry commander.