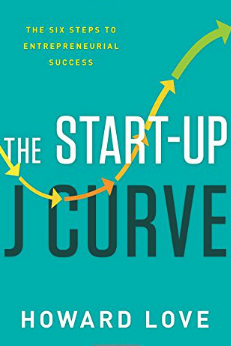 The Start-Up J Curve: The Six Steps to Entrepreneurial Success seeks to dispel the myth of “overnight startup success”. What really goes on behind the scenes is a lot messier than entrepreneurs (and the general public) have been led to believe. Most people assume that startups struggle to hit a certain point and then hit viral to become an instant success.

That couldn’t be further from the truth.

In reality, most startups go through a roller coaster ride of false starts, abandoned opportunities and changed directions. The irony is that most startup owners don’t realize this until they’ve been through it.

What is The Start-Up J Curve About?

Author Howard Love noticed a peculiar thing when he studied startups that became a huge success (like Pinterest or Twitter). Unlike the media headlines, startups weren’t simply overnight successes. They were failures. Twitter was a secondary project after the founders of Odeo, a blogging platform, failed to compete against iTunes. Pinterest began after the founders of Tote, a shopping app, failed.

Love found that these failures all had one thing in common. They went through a predictable long-term process that could be graphed as a J-curve. In the short term, each of them had their own unique path. Over the long-term, however, they went through six distinct and predictable phases. The Start-Up J Curve offers readers the chance to identify what phase of the process they are in and how to effectively work through that stage to reach the next one.

The analysis behind the Start-Up J-Curve caused Love to rethink what he had been told about start-ups. In particular, he learned that one of the major factors in the failure of a startup wasn’t the product. It was the business owner’s mentality. Many entrepreneurs get trapped in fixed mindsets about their ideas, their startup’s progress or their audience. Love urges business owners to keep a flexible mindset and strategies . Focus on the long-term vision, he says, not the short-term path to getting there. If the founders of Odeo never let go, Twitter would have remained a side project. Instead, the founders of Twitter took stock of their location and capitalized on it. That is the same thing Love hopes entrepreneurs are empowered to do after reading his book.

Love is a serial entrepreneur of 15 startups, with the earliest beginning in college. In addition, he is also a speaker, investor and completed his first Iron Man Triathlon at the age of 51.

What Was Best About The Start-Up J Curve?

Most books about startups focus on the short-term, like how to acquire your first 1,000 customers or get incredible media coverage. This is the familiar “go bold or go home” advice startups expect. Love does talk about some of this. But he focuses attention on helping entrepreneurs broadly understand where they are now and where they could be in the future

As mentioned above, The Start-Up J-Curve is not a comprehensive book on startups. It does not go into detail about investing options, legal issues, customer acquisition or retention. It also doesn’t address other business types. It is, however, a book to consider when you need a simple way to wrap your head around what’s going on in a startup. The ability to say that a business is in the “Morph” phase, for example, can be very helpful in quickly assessing a startup’s progress.

Why Read The Start-Up J Curve?

The Start-Up J-Curve was written with the prospective or current startup business owner in mind. Love provides a six-phase model he developed out of analysis and his own experience as a serial startup entrepreneur and investor. His model provides a conceptual approach for startup entrepreneurs helping them understand the chaotic reality of startups. In each phase, Love points out key obstacles and errors (especially in mindsets) that can sabotage a startup company’s success. His book skips the hype and glamour of startups (getting lots of cash, customers and attention) and instead focuses on the work that needs to be done so that your startup can be around in the long-term.