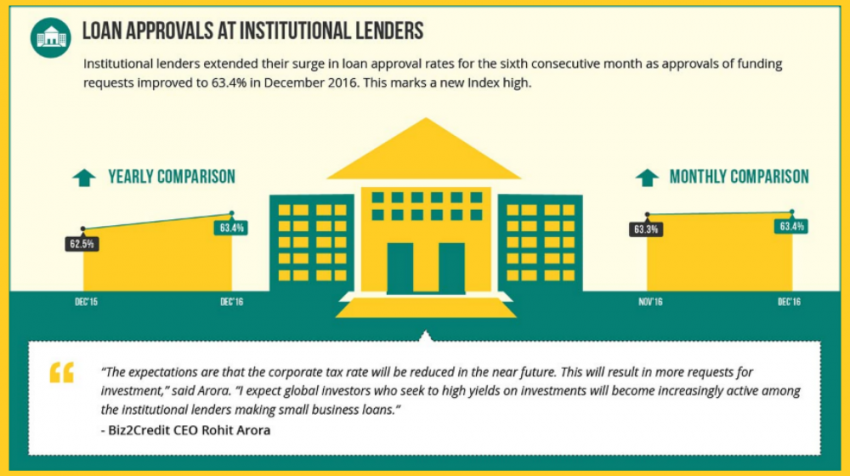 According to Biz2Credit the “Trump Bump” is extending beyond the stock market to small business lending. In its recent report, Biz2Credit says that lending at big banks ($10 billion+ in assets) and institutional lenders finished the year strong, improving to post-recession highs in December 2016. And President elect Donald Trump is being given at least part of the credit.

According to the report, small business loan approval rates at big banks jumped to 23.9 percent in December, marking the fifth consecutive month of increases for this category of lenders.

“The combination of an improving economy and the expected deregulation of the financial sector when Donald Trump takes office has provided banks with optimism. This has resulted in higher loan approval rates in recent months,” said Biz2Credit CEO Rohit Arora. “After a slow start to the year, banks aggressively worked on closing deals to bump up their end-of-the-year targets.”

Arora adds that the biggest benefactors of the incoming Trump administration are small banks that have been feeling pressed and held back by regulations under President Barack Obama. In December alone, small banks increased their loan approval by one-tenth of a percent to reach 48 percent approval. This is an encouraging sign as loan approval at small banks had stagnated throughout 2016.

However, it isn’t all good news for all lenders as loan approval rates at alternative lenders and credit unions dropped significantly, as they registered 58.6 percent and 40.9 percent approval rates respectively in December.

“As banks and institutional investors continue to invest in technology to streamline lending, alternative lenders are losing their competitive advantage, which allowed them to charge borrowers higher interest rates,” Arora said. Credit unions are on the other hand becoming something of a forgotten option for small business borrowers.

Biz2Credit reports on small business lending trends based on the analysis of more than 1,000 small business owners who apply for funding using the online lending platform.