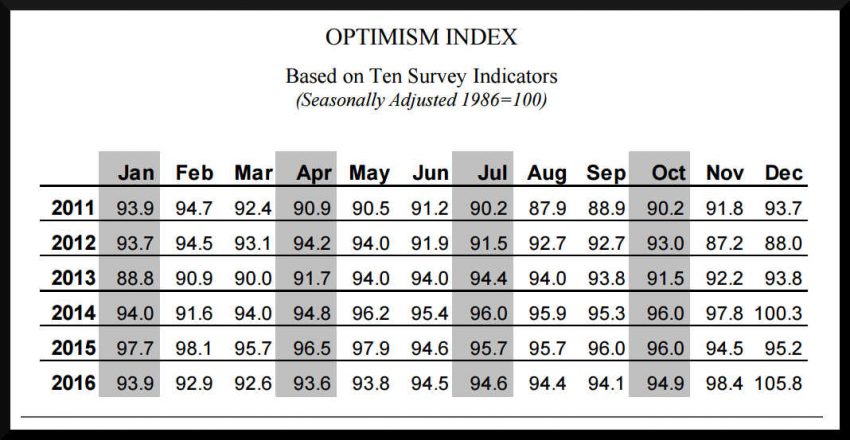 Optimism among America’s small businesses skyrocketed in December. A Optimism Index made up of 10 survey indicators rose 7.4 points to 105.8, its highest level since 2004, said the National Federation of Independent Business (NFIB). The December 2016 NFIB survey shows dramatic improvement in the economic prospects right after President Elect Donald Trump’s win.

The report claims a stratospheric 38-point jump in the number of owners who expect better business conditions.

The biggest mover in the survey was the “Expected better business conditions” category that rose from a net negative 6 percent to a net 38 percent, a 44-point spike. And the other two big movers in the survey included “Good Time to Expand,” and “Sales Expectations” that jumped by 12 and 20 percentage points, respectively.

“We haven’t seen numbers like this in a long time,” said NFIB President and CEO Juanita Duggan in an official release. “Small business is ready for a breakout, and that can only mean very good things for the U.S. economy.”

Whether the small businesses will remain optimistic all depends on two things: The incoming Trump administration and whether congressional leaders will follow through on their plans to repeal regulations, reform the tax code and fix the broken health insurance system.

NFIB’s survey clearly shows that small businesses are encouraged by the election results and now it’s a question of whether Trump and the congressional leaders can deliver.

NFIB has been carrying out the small business optimism surveys since 1986. They measure things like expectation to hire, sell products, expectation to borrow money and expansion plans.