"Nimble, Focused, Feisty: Organizational Cultures That Win in the New Era and How to Create Them" is designed for business leaders who want to win in this age of constant disruption and change. The old way of doing business (scale and control) won't help in the age of Netflix, Facebook, Google, and Amazon. To successfully compete in the 21st century, readers need a workplace culture that will be prepared for the chaotic next century. 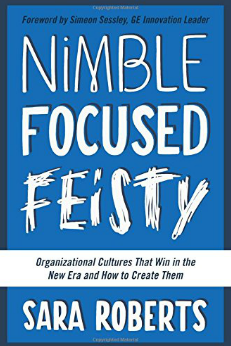 Nimble, Focused, Feisty: Organizational Cultures That Win in the New Era and How to Create Them refines the surprising paradox of success in business. At the height of their power, businesses like Blockbuster and Kodak, fail to perceive the changing world around them and they fall. They fall hard. The problem, however, runs much deeper than a big company ignoring their competition. It is more about the business failing to look in the mirror.

The book explores why culture, even one of success, can destroy a business if not proactively managed and cultivated.

What is Nimble Focused Feisty About?

In many cases, success is good for a business. When Amazon and Google hit their stride, they leveraged their early successes into even greater success. Success, however, can also be detrimental to a business. In the case of Blockbuster and Nokia, decades of success were wiped out by smaller and more tech-savvy companies that weren’t even on the radar at the time. This scenario of smaller, tech-savvy upstarts conquering established decades-old companies is turning the business world on its head.

The issue is deeper than technology, though, as Nimble, Focused, Feisty points out. It’s the workplace culture in which that technology is used. Both Blockbuster and Nokia had technology that could have been capitalized on. Instead, they relied on their established culture of success. As a result, they lost to businesses with a workplace culture that thrived on speed, focus, and risk-taking. These three characteristics, which the author identifies as “nimble, focused, and feisty” characterize the businesses, the book argues, will thrive in the 21st Century.

This focus on nimbleness, focus, and innovation is the exact opposite of business strategy from the 19th and 20th centuries. At that time, the name of the game was scale and control. Businesses developed cost-efficient and well-developed processes that were scaled to acquire a large number of customers. Workplace culture was focused on a hierarchy and innovation was incremental.This world of scale and control is gradually disappearing due to technology and globalization. Companies, whether they are a McDonald’s or the next tech startup, will need to cultivate a new workplace culture that can successfully deal with this constantly changing business world.

Author Sara Roberts is an expert on workplace cultures and a keynote speaker. She founded Roberts Golden, a consultancy which she sold 11 years later. In addition to her writing, speaking, and consulting, she is the Executive Director at EY, an accounting firm.

What Was Best About Nimble Focused Feisty?

Nimble, Focused, Feisty is one of the most comprehensive books readers will come across on assessing and changing workplace culture (outside of academic books). Roberts drills down to the nitty-gritty details of how culture can be envisioned and implemented. She also covers what information to discuss and how to implement those decisions from the top level on down.

There aren’t a lot of drawbacks to the book; however, there is an angle that could be further explored. The book focuses predominantly on C-suite and executive leadership from big businesses. Focusing on the unique challenges and restraints of a small business or from a mid-level manager level might offer additional support for those readers who don’t have time to have brainstorming sessions or multiple meetings in order to change their workplace culture.

Nimble, Focused, Feisty is perfectly poised to help executive leadership and business owners of established businesses. The book confronts the fear that many of these leaders have about disruption, which can be understandably confusing. Roberts provides a strong support for the improvement of workplace culture as a competitive advantage. She then guides readers through the assessment and initial implementation needed for transforming the reader’s own vision for workplace culture into a distinctive advantage.