Second Shift: How a City Transformed a Plant Closure Into Civic Empowerment

"Second Shift: The Inside Story of the Keep GM Movement" isn't for the everyday issues you have in the office. It's designed for the situation where you need to call to accomplish the impossible. The book tells the story of how one Lansing plant, written off by General Motors, was able to transform into a city-wide innovation that redefined community improvement. 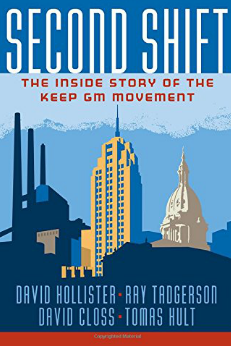 Second Shift: The Inside Story of the Keep GM Movement is a model for collaborative problem-solving that developed out of a crisis. The city of Lansing, Michigan was facing the loss of the Oldsmobile plant, an important source of jobs for the community and surrounding region. Many people weren’t as concerned about the aging plant, but the mayor (David Hollister) and others in the community knew the impact. It was their job to turn a community divided on the issue into a force that General Motors would come to respect.

What is Second Shift About?

Second Shift is more about the collaborative process behind the result. From the title alone, readers can infer that Lansing was able to keep GM. The crucial ingredient the book adds is the “how”. Hollister and his team of collaborators didn’t work in a community that instantly agreed to work with them. It was like any other community. It had people who cared deeply about the role of General Motors in the community, employees who just wanted a job, people who believed that General Motors was just pulling a ruse and others who just didn’t want to be bothered. It was Hollister’s task to figure out how to get all of these people together under one cause. Meanwhile, the mayor’s administration faced criticism from the council, from competing regions (who wanted the plant) and from the governor. He didn’t need them to agree on everything, but he needed them to agree on the cause: Lansing needed that General Motors plant!

To achieve that mission, Hollister adopted a six-step model from previous years of working in politics. And that model is the focus and key lesson of the book. As the book readily admits, the model’s utility doesn’t come from some fancy acronyms or clever terms. It uses basic and even obvious terms and concepts (One step is “Partnering”). The reward comes in how you use those six steps. Because when combined, they create an adaptive, resilient, and collaborative method of problem-solving that any group of people trying to accomplish something can use. Lansing’s story, with all of its unique twists and turns, demonstrates how this kind of problem-solving can work. Addressing a big problem is messy, but it is possible and that is what Second Shift brilliantly shows.

Hollister is not just the former mayor of Lansing, serving three terms from 1993 to 2003. After stepping down, he also became director of the Michigan Department of Labor and Economic Growth and CEO of Prime Civitas, a Lansing nonprofit dedicated to economic revitalization.

One of  his co-authors, Ray Tadgerson, is an engineer and consultant who has worked both for the city of Lansing and for General Motors, most notably on  the project featured in the book. He currently serves as president and CEO of his own consulting company.

Another co-author, Dr. David Closs, is a marketing professor at Michigan State University and a government consultant.

What Was Best About Second Shift?

The best part of Second Shift is the unique setting of the book and the model that came from it. Second Shift wasn’t created from the mind of an academic expert far removed from the business world. The book’s content was based on the real-life experiences of people stuck in a crisis. This gives the book an effective and battle-tested model for leaders who are facing a difficult situation.

Second Shift is a great book for leaders who can foresee a crisis coming. The book provides a model that leaders can use for agile and anticipatory planning to prepare for that crisis. The book’s presentation of that model is done in hindsight. This means readers get the overall milestones but not necessarily the intermediate steps along the way.

Second Shift will be best appreciated by leaders of any sized business who anticipate dealing with a difficult problem requiring a complex multi-faceted solution. The challenge faced in the book, convincing a huge employer intent on leaving to remain in the community, required working with multiple partners over an extended period of time. For those situations, the book provides an agile and effective model for suvival.