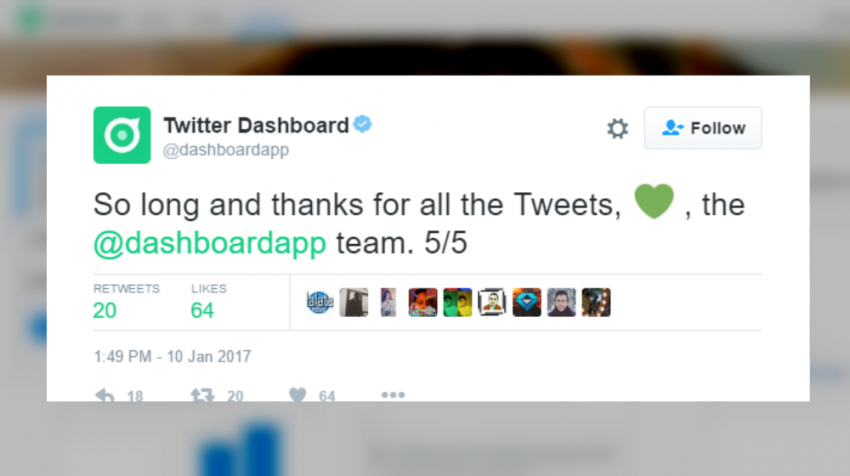 TweetDeck it wasn’t and now, Twitter Dashboard is toast.

And this is just the latest anti-development for Twitter. The social media site continues to appear to lag behind the others, namely Facebook, especially in the revenue and profits columns.

Twitter Dashboard will be closing down on February 3rd. 1/5

In the future, we hope to bring the best features from Dashboard to the broader Twitter community. 2/5

Thanks for making Dashboard part of how you use Twitter, we’ve been overwhelmed by your positive feedback. 3/5

In fact, it’s TweetDeck where Twitter is directing the actual Dashboard users who will be impacted by this recent development.

TweetDeck is a rather popular Twitter manager for users who either manage multiple accounts or follow several streams at once. It also allows for easy scheduling of Tweets, including from multiple accounts at once. Twitter geeks surely appreciate the user-friendly interface of TweetDeck, something Dashboard simply didn’t provide.

Dashboard was aimed at business users but outside of some analytics, the benefits clearly haven’t proven to keep enough users enticed. Some users told Twitter directly in response to the above tweets that they did find some perks of the app helpful — the ability to look at lists (again, something easily done on TweetDeck, too), for example.

@dashboardapp I am saddened and extremely disheartened to hear this news. Thank you for the work on this app. pic.twitter.com/P9QuH0QN0s

The company’s CEO, Jack Dorsey, was famously left out of a ballyhooed “tech summit” with President-elect Donald Trump. The site’s financial struggles are well documented. The NFL experiment’s success is unknown. Executives are leaving. It — along with Facebook, to be fair — has come under scrutiny for stances it has taken on censorship and banning users.

And as other sites are adding new features and experiments, it seems Twitter is taking away as much as or more than it’s giving.

The six-second video service, Vine, was recently shut down by the site. These somewhat goofy or irritating video loops had an ability to go viral when done correctly and were popular among some users. Regardless, it’s kaput.

Which Which is Which?

Dashboard’s failure is at least partly due to the fact that Twitter already has a product like it in place. And a popular one, too.

So, why have two of the same?

It’s got another example of this — live video.

The live-streaming app Periscope (which it owns) seems to have set the tone for the future of social media feeds. But, like the Dashboard/Tweetdeck conflict, Twitter also recently announced that live video abilities were coming to its mobile apps. And it’s not named Periscope.

So long and thanks for all the Tweets, ? , the @dashboardapp team. 5/5