iCompete: Lessons from the Life of an Accounting Industry Game Changer

John Hewitt's book, "iCompete: How My Extraordinary Strategy for Winning Can Be Yours", isn't the story of your ordinary multi-million dollar entrepreneur. It is the story of the lessons in service, persistence, creativity, and ownership that allowed him to think differently. That mindset became the foundation of the competitive advantage that outpaced and revolutionized the accounting industry. 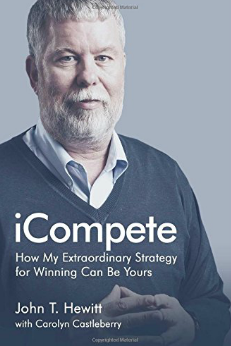 Becoming a leader in this competitive environment requires personal stamina and courage to address a volatile and complicated world. Becoming the founder of the second and third largest tax preparation franchise in the United States requires the story of John Hewitt. In iCompete: How My Extraordinary Strategy for Winning Can Be Yours, Hewitt shares the crucial life lessons he gained that helped him get rated as an accounting industry game-changer.

In the world of TurboTax and other online electronic filing options, we take it for granted that tax preparers once used pen and paper to complete their work. Hewitt hails from that era. And back then his idea of having tax preparers use computers to decrease errors was revolutionary. But that is only part of his industry-changing story. Hewitt would go on to create the second and third largest tax preparation firms in the United States (Jackson Hewitt and Liberty Tax service) after rising in the ranks of H&R Block from an entry-level position to regional director during college.

In iCompete, he credits his previous successes to a strategy developed out of his own life experience. The foundations of that strategy begin with four principles: service, persistence, creativity and ownership. Hewitt was able to combine these four principles with his technical competence in tax preparation to advance quickly through the tax services industry. He reached a point, however, where he had to decide between the uncertain life of an entrepreneur and a comfortable career in the tax services industry. He chose the life of an entrepreneur and never looked back.

iCompete looks at the life and business Hewitt developed when he took made that fateful decision to start his own business. It became one of the wildest rides he would ever take. But it was also one of the wisest things he ever did as well because of the tremendous education he gained passed on in the lessons in his book.

Today, Hewitt is the president, CEO and chairman of Liberty Tax Service, a tax preparation company he started after his former company (Jackson Hewitt) was acquired by another business. His inspiring story of success in the tax preparation industry began with a tax preparation course and led eventually to career as regional director for H&R Block. After leaving that company, he (along with his father) developed software that helped preparers complete tax returns. Hewitt is also a co-founder of two non-profit organizations, Stop Hunger Now and Run for Food International.

What Was Best About iCompete?

The best part of iCompete is the inspiring message that Hewitt offers throughout his book. Far from a straightforward “I started a business and got rich” story, the book follows a journey of entrepreneurship full of ups and downs. But it is still filled with the persistent faith that he was destined for better. Readers see this theme of persistent self-confidence throughout the book over and over again, reinforcing Hewitt’s philosophy of never giving up and being creative with what you have to offer.

iCompete is not a straightforward technical guide to business strategy. It approaches the topic of business in a broader sense than many readers might expect, given its title. Hewitt discusses business strategy from the approach of principles, instead of individual tactics. Readers can glean some tactics from Hewitt’s own story of working in the tax services industry but the overall intent is to give motivation for entrepreneurs needing persistence.

iCompete was written for the aspiring or current entrepreneur who has a dream about reaching a new level in entrepreneurship but lacks persistent ambition. As Hewitt suggests, no one has an easy journey to success. The book displays this principle in real-life and provides a solution for it — creative and persistent ambition. Using his own life as the case study, Hewitt shows how belief in a better life, creativity and strategic action gave him an advantage his competitors were scrambling to catch up with.