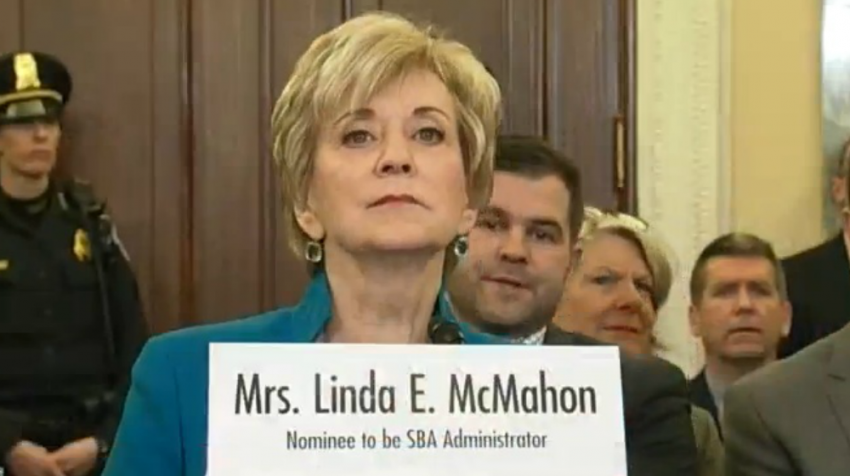 Linda McMahon, the wrestling business entrepreneur turned billionaire, was confirmed today as the new Administrator of the U.S. Small Business Administration.  She will become part of President Trump’s cabinet.

McMahon’s confirmation passed by a vote of 81 to 19 in the U.S. Senate. Unlike a number of other Trump Administration appointments, McMahon had bipartisan support both in the earlier Senate Small Business and Entrepreneurship Committee hearing where she testified back in January, and in today’s full Senate vote.

McMahon has suffered the trials and tribulations of other mom and pop business owners. During her confirmation hearing, she told the story of how she and her husband had an earlier business that failed. For a brief time they were on food stamps, she recalls. And their car was repossessed from their driveway.

The couple bounced back in a major way. Their business, World Wrestling Entertainment Inc. or WWE, (NYSE: WWE) eventually grew into a publicly traded company. Today it has a market cap of over $1.7 billion.

McMahon stepped away from the company several years ago. Yet it’s still somewhat of a family business. Her husband since 1996 and co-founder, Vince McMahon, is the Chairman of WWE. Their daughter, Stephanie McMahon, also plays a key executive role in the business today.

As pointed out a couple of weeks ago, McMahon seems like a good choice to run the Small Business Administration due to her experience growing a business. It’s hard to effectively address the needs of small businesses if you haven’t actually experienced what small business owners and startup entrepreneurs go through.

Failure might seem like an odd thing to admit to during a confirmation hearing. But it is not a black mark in the world of small business. Failure is actually a badge of authenticity and experience. Most successful entrepreneurs have had at least one failure — and learned from it. Some have had multiple failures.

She testified in January about why she should be the new SBA head, recalling, “I remember the early days every month when I had to decide whether to continue to lease a typewriter or whether I could continue to buy it. Yes, believe it or not, that $12 a month at that time made a difference in our budget.”

“Like all small business owners, I know what it’s like to take a risk on an idea, manage cash flow, navigate regulations and create jobs,” she added.