Think you have an insurmountable obstacle? Try creating a path to Wall Street as an undocumented immigrant. In "My (Underground) American Dream", Julissa Arce was able to transform hard work and an expired tourist visa into a powerful obstacle-crushing journey that took from Mexico to the one highest positions, Vice President at Goldman Sachs. Her book shares the ups and downs that accompany a dedicated woman who pursued and achieved the seemingly impossible. 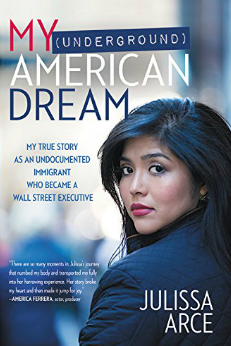 My (Underground) American Dream: My True Story As An Undocumented Immigrant Who Became A Wall Street Executive is about creating prosperity against insurmountable obstacles. Julissa Arce was an undocumented immigrant who ended up walking the halls of Wall Street as a VP at Goldman Sachs a few years later. Her story is a testament to the power and ingenuity unleashed by a dedicated woman pursuing the American Dream.

A bill passed in Texas (House Bill 1403) that paved a way for undocumented immigrants who were residents to go to college. It took a lot of paperwork, but she put in the additional work. After processing, she got a call from the Governor’s Office letting her know that she could attend the University of Texas.

Arce has enjoyed successful stints as a Vice President at Goldman Sachs, a Director at Merrill Lynch and executive positions at many other companies. Currently, she works as an immigration rights advocate, speaker and chairman of Ascend Educational Fund, a scholarship program for immigrant students.