I’m a huge football fan that lives in Atlanta. And although I’m not a Falcons fan (I’ve been a Los Angeles Rams fan since five years old) I am definitely rooting for my hometown team to beat the Patriots in Super Bowl LI.

While the Patriots are favored to win game, based on data collected and analyzed by eBay DataLabs, Falcon fans are buying up merchandise at a higher rate than Patriot fans are since both teams won their respective conference championship games two weeks ago. Zoher Karu, eBay’s Chief Data Officer, joins us to share some other interesting data points they’ve discovered about what’s driving Super Bowl merchandise sales.

Below is an edited transcript of our conversation. To hear the full interview click on the embedded player below. 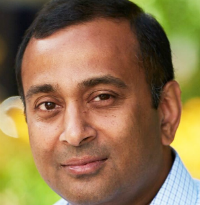 Small Business Trends: Why don’t you give us a little bit of your personal background?

Zoher Karu: Sure, so I have done a lot of work in the data analytics space across a variety of industries. In fact I have done work around tracking inside of retail store environments as they shop around and where you walk and where you stop. I’ve done work around understanding conversations as recorded in call centers and understanding customer distress levels and patterns in those conversations. And I’ve done certainly a lot of work in the retail and eCommerce space around customer and customer behavior. I was at Sears Holdings for a while, and then now have been at eBay (NASDAQ:EBAY) for several years. I was born in India, but I grew up in the US. In fact I would spend most of my time in Alabama and I have also in fact lived in Atlanta, Georgia for several years for a portion of my career.

Small Business Trends: Why don’t you tell us a little bit about eBay DataLabs, and then also how your role as Chief Data Officer fits into the whole eBay property there.

Zoher Karu: As the Chief Data Officer role at eBay, I think about looking across all of eBay and enabling other people to be more successful when it comes to using data and analytics to drive growth. For a big part of my career here at eBay I was directly responsible for understanding and organizing our data, delivering insights about customers, understanding patterns in the customer behavior, predicting which customers are likely to buy in certain categories for example which powers a lot of personalization activities. More recently I’ve been doing more thinking around things like data strategy, data sharing, data monetization, data governance, a lot of things. Data is one of the most critical assets to eBay, so really thinking about how to best take advantage of that everywhere.

When it comes to DataLabs, the mission and the reason we started data labs was to uncover new patterns and insights in the data itself, and to tell stories with that data, and to find new insights. eBay is a global market place, we like to think of ourselves as almost being a window into the world’s commerce economy. So we’re keeping the pulse of the world’s commerce economy. We see patterns in the data, we’re lucky to be able to see, and fortunate to be in the position to see some of those patterns. So some of them might be things like which car colors are most popular and how has that changed over time, because we see a lot of vehicle transactions. Or it might be, which sports teams seem to be rising or falling in popularity, or it might be which Star Wars character appears to be dominant. Or how are trade corridors between countries changing in terms of the merchandise flowing in between them.

Small Business Trends: So tell us what are you finding when you look at what’s taking place since both Atlanta and New England won their championship games and were named to the Superbowl what are you seeing in the data in terms of buying patterns for the Falcons fans versus the Pats fans?

Zoher Karu: Certainly the Patriots are a very dominant franchise overall. In fact if I look at all the different types of sports teams, not just football but across the other sports like baseball for example, I think the Patriots were number six or so in terms of total sales activity on eBay. And the Falcons were … maybe 40 something, 47 in rank. So just in terms of the dominance of the franchise as a whole, Patriots hold that spot. 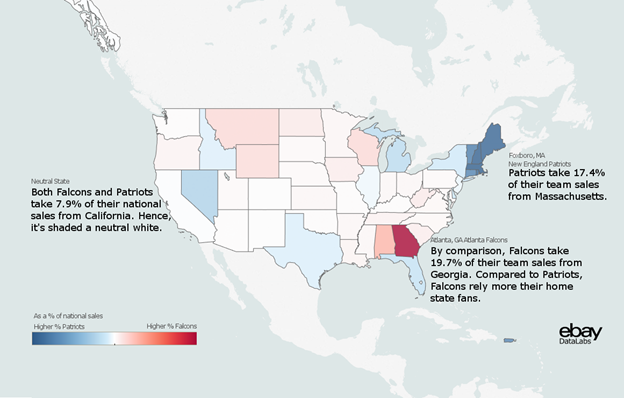 However, since the Falcons have clinched their title, we have seen Falcons merchandise sales accelerate, and in fact in the recent weeks, they’ve been outselling Patriots merchandise. So we’ve seen an uptick. Maybe people were surprised to see the Falcons make it and all of a sudden ran out to get their gear to support their team. But we look at the time pattern and we also look at geographically what’s going on. And if we look at just merchandise sales for example by state, I think it’s almost like an underdog story. The Patriots are outselling the Falcons merchandise at least if you look across the entire season in every state except Georgia and I think Alabama as well.

Small Business Trends: Are there other interesting buying patterns?

Zoher Karu: One interesting factoid might be if I just look at the highest Falcons merchandise ZIP code in the country, I think it’s 30349, if I remember that correctly, just southwest of the airport outside Metro Atlanta there. And that has the largest volume of Falcons merchandise sales. One thing that may be interesting to your listeners is our site explore.ebay.com shows you a variety of things. One tab of which shows you the popular selling merchandise, so you can go to that tab and type in Atlanta Falcons for example and you can see the most popular selling Falcons merchandise, and you get to do the same for the New England Patriots. And there’s some interesting things on there. A lot of beanie caps, and the Dirty Birds T-shirt on there right now for example. It’s just interesting to see the kind of things people are buying.

Small Business Trends: This is very cool stuff. Though it sounds like, and this makes perfect sense in general, the Patriots are much more popular across the board. People have bought more stuff over the course of the year for the Patriots. But since they both made the Super Bowl, it sounds like Falcons folks are out there buying at a faster rate than Patriots folks.

Zoher Karu: That’s right, I think the bandwagon has started to roll.

Small Business Trends: Are we able to predict based on these patterns that the Falcons are going to win, is that something that you can tell us?

Zoher Karu: That’s hard to say, you’ll have to talk to my bookie on that one. But Julio Jones is the most popular merchandise on the Falcons team. And quarterback Matt Ryan is pretty close.

Small Business Trends: It’ll be interesting to come back and see just how the sales track if the Falcons win.

Zoher Karu: Interesting that you say that, last year we did some work around the Super Bowl as well on the Denver Broncos versus the Carolina Panthers and we did show Denver ahead when it came to eBay sales and sure enough, they came out ahead so who knows. We could be right again.