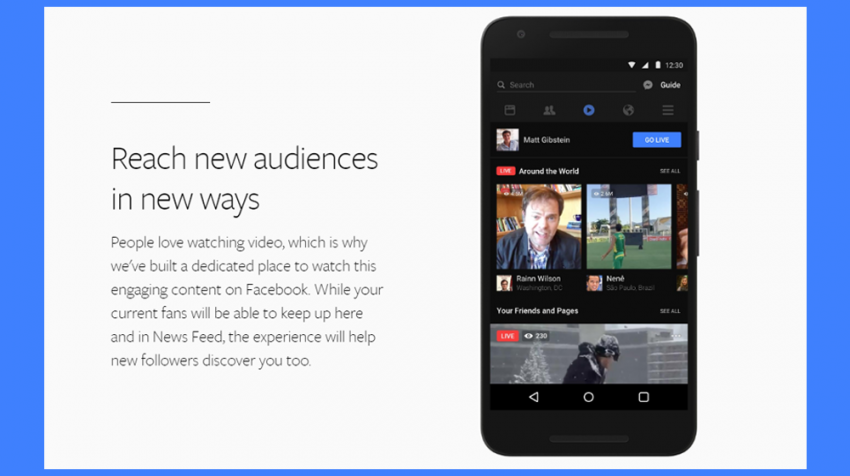 Facebook (NASDAQ:FB) is taking live streaming to another level as it recently announced that users can now, in addition to smartphones and mobile devices, broadcast live video directly from their laptop or desktop computers.

“While it’s been possible for people to go live to Facebook from mobile devices since last year, desktop or laptop computers provide a stable camera setup that can be beneficial to many types of Facebook Live broadcasts — from Q&As to vlogs to tutorials to any broadcast from someone who isn’t on the move,” the company said in an official post.

The update also allows personal accounts to post live video feeds, not just a business Page. “We’ve also added a new feature that makes it easy to use streaming software or external hardware when going live from a computer. This capability previously was possible only through a Page, but we’ve heard feedback from our community that it would be useful for profiles, too.”

Facebook Live was introduced in August 2015 and back then it was only available to a few selected celebrities. In December of the same year, Facebook decided it was time to let more people have fun with the app.

While the ability to use Facebook Live from computer or laptop devices may be welcome news for those who want a more stable setup, the need for high quality livestreaming to catch your audience’s attention hasn’t changed:

Use a Third-party App to Improve Your Broadcast

Do you at times come across Facebook Live videos that sound and look amazing, while others are a bit difficult to hear and see? To create a good quality broadcast, you need to consider using a third part app such as Telestream’s Wirecast.

At the very least get away from background noise. But for good quality sound, invest in a noise cancelling microphone. Be sure to stream using an HD camera whenever possible.

Create a Studio for your Broadcasts

For TV-quality streams, you will have to get a dedicated machine that’s specifically designed to handle high-quality live streaming, with proprietary software loaded onto it. Based on your needs, two companies you’ll want to look at are NewTek and Livestream.

One of the live broadcast challenges is getting enough people to watch and engage with you. However, to counter this, you need to start promoting your broadcasts before you go live. You could easily do this by using the Events listings on Facebook.

Probably the most important tip is to broadcast consistently. That counts even if it’s once a week. If people know to expect a live stream from your company or brand, they’ll start looking for it.