Most Small Business Owners Have Negative View of Mobile Banking 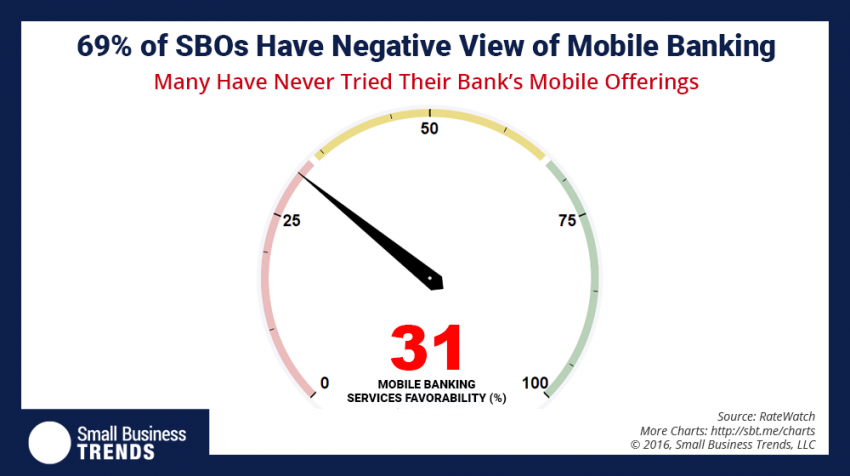 Small businesses are generally early adopters of technology, but a new survey conducted by RateWatch on the subject of mobile banking says otherwise.

According to the survey, which was conducted in the third quarter of 2016, the perception of 69 percent of the respondents regarding this technology was not positive. Another data point in the survey corroborates this fact, as 34 percent never used mobile banking even though it was available to them.

This goes against the trend in personal mobile banking, which according to a survey by the Federal Reserve, has increased by 39 percent in 2014 and 33 percent in 2013.

Why Mobile Banking Is Not Popular Among Small Businesses

So where is the divide between consumers and small businesses?

The disparate systems need to be part of a systematic and structured approach to bring in small businesses, because according to RateWatch, they are a huge untapped market for financial institutions.

The wide range of industries highlights the issue is not related to one particular segment, which may indicate lack of awareness in the technology, with security fears playing a prominent role in discouraging some of these businesses from using mobile banking.

In a dramatic contrast, another survey by the Raddon Financial Group revealed 52 percent of businesses with up to $10 million in annual revenue rely on mobile banking to access and manage their accounts. And for millennial business owners, the number jumps to 68 percent, with this group indicating mobile banking is a must have.

For small businesses, mobile banking provides a number of time saving features. In the Raddon survey, 80 percent said it saved a significant amount of time, which is a commodity small businesses can never have enough of.

Small business owners who are skeptical or too distracted to learn more about mobile banking options should consult their local branch to discuss what’s available. And don’t be afraid to ask about the low-impact mobile options the bank offers. For example, what mobile banking service requires the least amount of training to adopt?

Not every tech advancement in automation is right for every small business. Pick the ones that work for you and gradually work to adopt others in the future.