In the News: Nimble Gets Funding, Google Data Studio Offered for Free 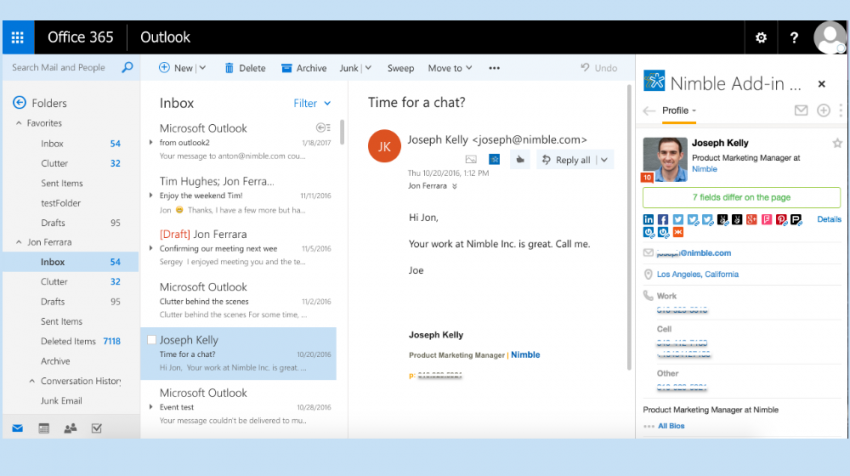 If you want your business to succeed, then you need to have the best information at your disposal. That’s where tools like CRM and data visualization come into play.

Nimble is a big name in the CRM game. And this week, the company announced a round of funding that will add to the company’s growth. In addition, Google announced that it will offer its Google Data Studio for free to users.

These are just a few of the news items impacting small businesses this week. Take a look at even more below in this week’s Small Business Trends news and information roundup.

Nimble, the CRM that says it “builds itself,” announced today that it has raised $9 million in Series A funding. The Nimble funding will be used to scale the company’s growth, according to CEO Jon Ferrara. Nimble plans to add to its product engineering team and accelerate sales efforts.

Google (NASDAQ:GOOGL) recently made its data analytics and visualization more appealing by removing a major restriction — limit on the number of reports. Until recently, you could only use Data Studio to create up to a maximum of five reports, but with the update, you can now create and share as many reports as you want.

The Game Developers Conference (GDC) is the world’s largest professional gaming industry event, and at GDC2017, NVIDIA (NASDAQ:NVDA) unveiled the fastest gaming GPU the company has made to date, the GeForce GTX 1080 Ti. For professional gamers and the rapidly growing E-sports segment, the GTX 1080 Ti couldn’t have come soon enough.

Amazon Web Services’ Simple Storage Service or S3 started experiencing high error rates resulting in a domino effect of site after site across the country going through minor and major glitches. Problems started at around 1 p.m. Eastern on Tuesday at the company’s data centers in Northern Virginia .

Wendy’s is the latest fast food chain to automate the ordering process. The restaurant announced this week that it will add self-order kiosks to about 1,000 of its restaurants by the end of the year. McDonald’s and Panera Bread also have similar features. This move, of course, makes some workers nervous about job loss in the fast food industry.

It’s only been a little over a month since Donald Trump was sworn in as President and a new survey by BizBuySell, one of the largest online business-for-sale marketplaces, reveals that almost half of the small business community approves the Trump presidency.

With unprecedented economic uncertainty in the US and UK, you would expect small businesses would be more pessimistic about the future. Yet, according to the second annual Make or Break 2017 report from Xero (NZE:XRO), small business owners are irrepressibly optimistic going into 2017.

After a good end to 2016, a new study has revealed Hispanic small business owners are excited about their prospects this year. According to the inaugural Bank of America 2017 Hispanic Small Business Owner Spotlight (PDF), 71 percent of Hispanic entrepreneurs expect their revenues to increase. That’s 20 percentage points higher than that of non-Hispanic entrepreneurs (51 percent).

An FDA Regulation Is Snuffing Out Small Cigar Manufacturers

FDA attacks on small cigar makers are eliminating consumer choice with an illegal new rule, the nonprofit government watchdog Cause of Action (COA) Institute argued in an amicus brief filed Wednesday in the U.S. District Court for the District of Columbia.

Highlights from the FedEx #Smallbizchat About Growing a Small Business Online

What do you focus on most when trying to grow a small business? When it comes to growing your business online, you can focus on things like content creation or social media promotions. You can also consider seeking extra funding to jumpstart your growth. But there isn’t just one right answer for every business.

When it comes to marketing and advertising, knowing all of the latest methods is a must. So having a marketing agency that understands all of the latest tech tools and trends can be a major benefit. Walk West is one such agency. You can read more about the company in this week’s Small Business Spotlight.

In a story of David versus Goliath, a small taxi company challenged a city protected monopoly — and came out on top.

Every business has to learn how to deal with healthy competition from other brands. But there comes a point where competition can become not-so-healthy. Such is the case with a recent dispute between Google and Uber over self driving car technology. Both have their own programs that are working to develop the technology. Google’s project is called Waymo. And Uber’s is Otto.

Extreme California Weather Highlights the Importance of Being Prepared (Watch)

For the last several years, California has been been dealing with extreme drought levels. This has led to plenty of issues for businesses in the state, most notably for agriculture businesses. But even those that use water for other things like food processing, energy and hospitality have had to make adjustments due to the drought levels.

See Also: How Does a Small Business Use Google News?

Should You Invest in the Snapchat IPO? Read This First

Whether you’re obsessed with keeping your Snapstreaks going or have no idea what that means, you may be itching to invest in this week’s initial public offering of Snap Inc., parent company of the popular Snapchat app. The appeal is understandable. For users of the app, owning shares of a company you use every day (or hour) can seem like a good investment.

Snapchat is looking to differentiate itself as Instagram, and now WhatsApp have essentially cloned its Stories feature. So the company has introduced Spectacles, a wearable that has been designed to seamlessly integrate with Snapchat. This is a pair of sunglasses that will let you make a 10 second Snap from your perspective at the press of a button and wirelessly add it to Snapchat.

How to Get Started on Whatsapp

Whatsapp is on the move again. The platform recently followed Instagram in cloning one of rival Snapchat’s more popular features. WhatsApp is a social messaging service that was acquired by Facebook for a whopping $19 billion in 2014. As of April 2016, more than a billion people were already using the instant messaging service around the world.

How to Avoid Double Taxation with an S Corporation

Paying taxes is unavoidable, yet that doesn’t mean you need to pay more than necessary. You can make smart decisions to minimize your tax burden, without running afoul of the IRS. For small businesses and entrepreneurs, business structure impacts how you pay taxes, and potentially how much you pay as well.

Most Small Business Owners Have Negative View of Mobile Banking

Small businesses are generally early adopters of technology, but a new survey conducted by RateWatch on the subject of mobile banking says otherwise. According to the survey, which was conducted in the third quarter of 2016, the perception of 69 percent of the respondents regarding this technology was not positive.

BlackBerry (NASDAQ:BBRY) dominated the mobile segment before the advent of the smartphone, yet saw their  fortunes shift soon afterwards. Now the brand is making a comeback, with different manufacturing and licensing agreements. The BlackBerry KEYone is yet another attempt by the Canadian company to capture its former glory as it finds its footing in this new ecosystem.