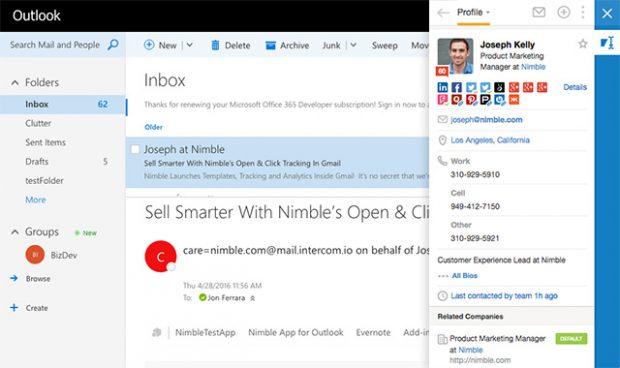 Nimble, the CRM that says it “builds itself,” announced today that it has raised $9 million in Series A funding.

The Nimble funding will be used to scale the company’s growth, according to CEO Jon Ferrara. Nimble plans to add to its product engineering team and accelerate sales efforts.

Nimble, headquartered in Santa Monica, has been developing its product since its founding in 2009 — and the years of dedicated effort show.

Nimble stands out in the CRM world because it aggregates data into a CRM database automatically. What that means is, Nimble pulls in information from outside sources and builds a CRM database for you.

Ferrara pointed out that users today spend too much time adding and maintaining data in CRMs. That, he said, results in low adoption of CRM systems.

However, with Nimble, a lot of the information is pulled together for you from public sources such as Twitter, LinkedIn, Facebook and other websites. Then it’s synced with other data you already have, such as your email and calendar data. So that means you spend less time entering data manually into your CRM, or trying to figure out how to port data from one app to another. Nimble handles much of that automatically.

The CRM that Displays Everywhere

Another impressive feature that sets Nimble apart is the way it shows a pane of information about a contact no matter what screen you happen to be in.

If you’re using Microsoft Outlook email, for instance, you can see the Nimble information for that contact right alongside the email from that person. See the screenshot above – the panel on the right side of the screen is the Nimble app appearing next to an Outlook email.

The benefit, of course, is that you don’t have to interrupt what you’re doing and dig into your CRM system to look up a contact. Core information is displayed right there on whatever screen you’re on.

According to CEO Jon Ferrara, Nimble is a CRM designed to fit seamlessly into your existing daily workflow. It doesn’t force you to change your work habits for your CRM. “Nimble lives where users work: in email, the browser, and on their mobile devices.”

In an interview earlier this week Ferrara told us, “At Nimble, we believe a business is built on the contacts you have. When you go to a contact record today in either Office 365 or G Suite, there’s no cross referencing to social media or other interactions you’ve had with that contact. Nimble automatically synchronizes your contacts with such interactions.”

The ability to work natively together with Microsoft Office 365 is a key part of Nimble’s recent development push. Nimble also earlier this year launched a mobile app for use with Outlook Mobile.

Ferrara said making Nimble work with Office 365 is especially significant because he sees the Microsoft product coming on strong, especially among small businesses. “Today about half of our new customers are using Office 365, compared with a year ago when most were using G Suite.”

Vision: Be the Relationship System of Record 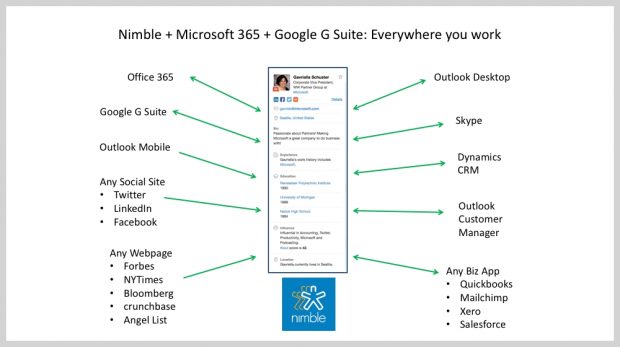 Ferrara told us that his vision is for Nimble to be the “relationship system of record.” Nimble is a unifying application because it unifies and syncs data from multiple sources, he said.  (See graphic above.)

“Today, most people have contact records in Office 365 or G Suite. The problem is, that’s not the only place where you have contact data and records. You have them in calendars, CRM, your accounting system, other types of business apps, as well as social media sites,” he pointed out.

Nimble is designed so it can be used as a small business’s sole CRM because it has advanced CRM features such as follow-up reminders, lead capture, sales forecasting, automation and more. But due to its automatic data aggregation and “display anywhere” capabilities, Nimble is flexible enough to be used with existing CRM systems, too.

“A small business can use Nimble in conjunction with an existing CRM you already use, or as your sole CRM. We deliver value either way,” Ferrara said.

Nimble’s Series A financing was led by Imagen Capital Partners. Other investors in the Nimble funding include Mark Cuban’s Radical Investments, Google Ventures, Indicator Ventures and a consortium of strategic angels including Jason Calacanis, Howard Lindzon and Don Dodge.

Nimble previously raised $3.5 million in seed funding. CEO Jon Ferrara has a long history of accomplishment in the CRM industry, as an early player who co-founded one of the first CRM applications, called Goldmine. He sold it in 1999.