"The Middle Class Comeback: Women, Millennials, and Technology Leading the Way" is an exploration of the problems and potential faced by America's middle class as they head into the 21st century. The book demonstrates how the very confusing world of high debt, disruptive technology, and a new world of work have the power to transform our most problematic social problems (like paying for higher education or politics) into innovative and unique solutions. 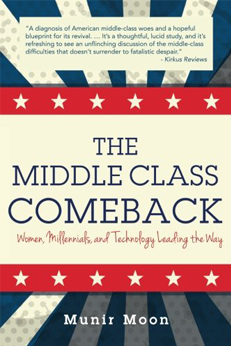 With the Global Recession, a housing crisis, the internet bubble, rising college costs, increasing student debt and more, the middle class has been hit hard in the past few decades. While these things may seem to cast a rather negative light on the prospects of America’s middle class, Munir Moon doesn’t think so. In his book, The Middle Class Comeback: Women, Millennials, and Technology Leading the Way, he argues that the middle class (both the current and aspiring members) is entering a period where their collective actions could radically transform America as we know it.

What is The Middle Class Comeback About?

If you ask any economist, magazine editor or politician, the middle class is struggling financially. To be more honest, it is shrinking and shrinking fast. This is important because the American middle class is the financial and social anchor of American life. It’s the image most people have in mind when they think of an “American” family. It’s the group politicians campaign to reach. It’s the group that all other levels of American society are measured against. Without the American middle class, there is no America as we know it.

Despite concerns about this pivotal group’s decline, Munir Moon believes there is a reason to be optimistic. The news isn’t all bad. In fact, there are segments of the population and sectors of the economy where the middle class ideal seems to still be a reality. Those sectors are where Moon argues we should be focusing. But where are they? Moon chooses to focus on two areas, demographics (women and Millennials in particular) and technology. He argues these groups — women, Millennials and the technology sector — have the ability to transform decades-old industries in need of rejuvenation. He also believes they can transform education, the workforce, medicine, politics and America’s taxation system.

The Middle Class Comeback contends that capitalism and democracy are adaptable. When a certain industry doesn’t serve its customer or client base, it fails or gets remixed into something that is useful to the needs of that customer base. The changes of the future will be fueled by the dynamic shifts of demographics and technology. There will be more Millennials, more women in the labor force and positions of leadership, and more technology transforming how society interacts. These changes will in turn bring changes in products and services consumers purchase, the politicians they vote for and the policies they support. With that collective power comes a collective potential for the middle class to completely revolutionize almost every aspect of American society.

Moon is an author, entrepreneur, and commentator on social policy and issues for the Huffington Post and LA Progressive.

What Was Best About The Middle Class Comeback?

The best part of The Middle Class Comeback is the action-oriented optimism that fills the entire book. Many books praise the ingenuity of the middle class, but they contain more political rhetoric than policy. The Middle Class Comeback maintains the same amount of optimism without falling into that trap. The focus in this book is on exploring the potential of America’s future by exploring the future created by the most promising trends of today.

The Middle Class Comeback is a welcome dose of optimism for readers who are tired of hearing nothing but negative news. In that optimism, it glosses over social issues that don’t have an easily defined solution. To its credit, the book discusses the need for more work in the areas of race relations, women’s rights and representation, among other issues. The book, however, doesn’t really provide more than a simple optimistic overview. A deeper exploration of those issues and how they relate to the economy, possibly in future books, would yield more solutions for the future of middle-class America.

Why Read The Middle Class Comeback?

The Middle Class Comeback was written for those readers who want to dig a little deeper into economics (particularly in the areas of technology, healthcare or Millennials). The middle class has mythic status in the eyes of the American public and politicians alike. Moon dives into that mythic side and asks, “What makes America’s middle class so great?”. His enthusiastic, but nuanced, answer to this question is an exploration into the potential and hope behind America’s powerful social and cultural engine. Moon’s book shows why and how (in a lot of cases) America’s middle class has a lot more power than its members might believe.