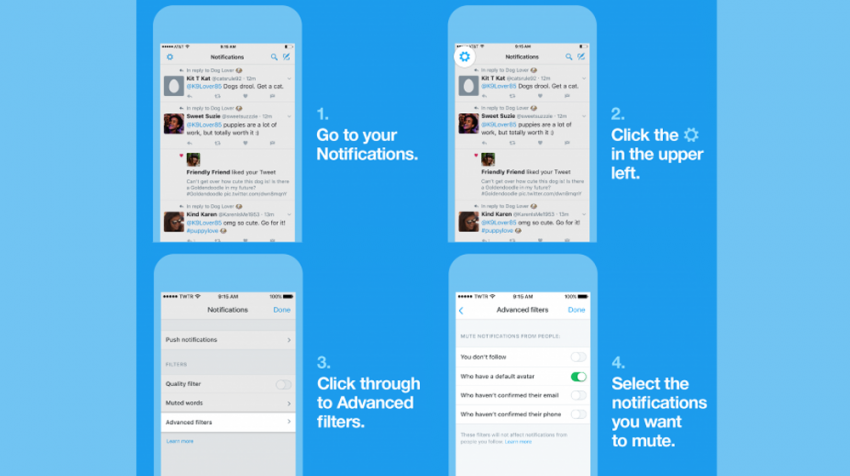 Has your business ever been harassed by abusive tweeters?

If you have, Twitter’s latest features could be a help. The site is adding a range of new safety features in an effort to combat user harassment on its network.

In a blog post, the social networking site announced another round of updates, including giving users more control on what tweets they do or don’t want to see. Twitter signals being more proactive in identifying abusive tweeters as well as being more transparent on how the platform is curbing the abusive behavior.

Additionally, the social network said that it is further expanding its mute feature beyond limiting notifications based on phrases, keywords and entire conversations. This simply means that you can now mute directly from your home timeline as well as set a time-limit on the mute. This could range from a day to indefinite muting. The feature also enables you to hide certain content and accounts from sight.

Twitter (NYSE:TWTR) also revealed that it is actively using algorithms to identify abusive accounts, adding that it will “limit functionality” of abusive accounts for an unspecified amount of time or even remove them if the abuse doesn’t stop.

“We’re working to identify accounts as they’re engaging in abusive behavior, even if this behavior hasn’t been reported to us,” said Twitter VP of Engineering Ed Ho. “Then, we’re taking action by limiting certain account functionality for a set amount of time, such as allowing only their followers to see their Tweets.”

With the update, you no longer have to worry about trolls or unreasonably angry users ruining your reputation by posting abusive content on your account. Simply mute them for a few days, months or even indefinitely if you so wish.