Why Aren’t They Shouting? How Technology Changed Everything in Banking

Like every other industry, technology is transforming everything we knew about the banking industry. Depending on your point of view, this transformation is improving or threatening our economy. "Why Aren't They Shouting?: A Banker's Tale of Change, Computers and Perpetual Crisis" is an exploration through the implications of this transformation using the personal story of a banker who has seen the world change from spot brokers to robots who invest for you. 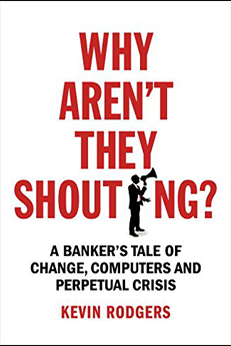 Like every other industry, banking has been disrupted by technology. Banks are able to do powerful things, like transfer trillions of dollars within 24 hours, because of it. The chief issue is whether this power is making banks more effective or more dangerous. Why Aren’t They Shouting? A Banker’s Tale of Change, Computers and Perpetual Crisis shares the story of one banker as he lived through the ups and downs of banking undergoing a technical revolution. His book provides a truly insightful look into the history of technology and what it could mean for banking’s future.

What is Why Aren’t They Shouting About?

“Put simplistically, banks are just people and computers, all the rest is nice to have but not essential.”
– – Why Aren’t They Shouting?

The book’s title stems from a past experience author and banker Kevin Rodgers recalls while leading a group of German visitors on a tour of Deutsche Bank where he worked at the time. As he describes, the tour was a well-executed success but Rodgers could tell that something was amiss. One woman asked a question that seemed to be on every visitor’s mind, “Why is everything so quiet?” This disturbed Rodgers for a while because he hadn’t noticed the transformation of his office from a shouting match between spot brokers into keyboard clicks and hushed chatter. Rodgers explains: “In short, computers had, in all but the direct emergency, reduced the need to shoot anything at all.”

That simple question by a member of a tour group became the starting point for a broader question Rodgers explored in the pages of his book. There he examines how technology transformed his career and the industry where he spent most of his professional career. Computers, he notes, have been a part of the banking industry for decades but previously they were limited and clunky. As computing power developed and became more portable, things started to change. Information became decentralized, jobs became automated, and financial products became more complex. With this rise in complexity and convenience came the lure that eventually collapsed the mortgage industry and threatened the entire banking system.

Rodgers’ book is an exploration of how the banking system evolved into that near-fatal condition and the situations that society will have to confront as we face even more technology in our banking future.

Rodgers is a former banking executive who worked in various aspects of the financial services industry from the trading floor all the way up to the C-suite. He has previously worked at Merrill Lynch, Deutsche Bank, and Banker’s Trust and retired in 2014.

What Was Best About Why Aren’t They Shouting?

The best part of Why Aren’t They Shouting? is the detailed industry perspective Rodgers offers to readers about the bank industry, especially the foreign exchange market. Rodgers doesn’t just present details about the banking industry, he provides a look into the mentality of the bankers on the ground floor and executive suite. This perspective helps provide readers with some context for the decisions made by banks, particularly those leading up to the Great Recession. The lessons Rodgers takes from these days and from his wide range of experiences in the banking industry point to vital questions that bankers (and regulators) should be asking moving forward.

Why Aren’t They Shouting is an exciting personal ride through banking as it evolves, yet the book’s content can be a challenge. Although Rodgers makes several attempts to break the content down, many aspects of the global banking industry (particularly the foreign exchange market) can still be a little intimidating. Readers should have no trouble picking up on the overall issues (security, competition between banks, etc.) but they might miss out on the context in the terminology. For example, readers will probably understand that Collateralized Debt Obligations are not a good thing  from the author’s perspective, but they still may not understand how they work.

Why Read Why Aren’t They Shouting?

Why Aren’t They Shouting contains a needed perspective in a world where a post-recession economy continues to be disrupted by a dizzying array of new technologies. Rodgers brings humans back into the equation. His book explores “How did banks evolve to the current thing they are today?” and “What should we be on the lookout for in the future?” As his book cleverly points out, it will be the humans and the rules they create, not technology, that will sustain the banking industry. His book offers a personal view into an industry many consumers regard with wary concern. Through his words, readers get a chance to see the humans that are behind the banking headlines.