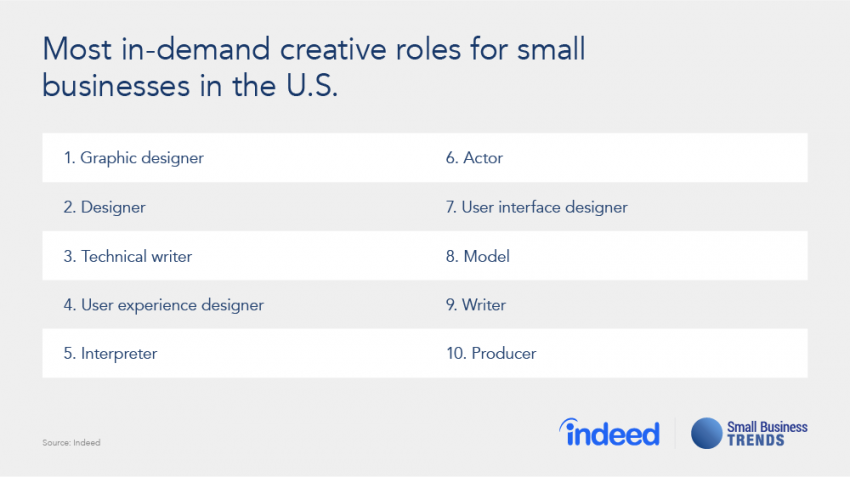 Startups and small businesses looking to add to their teams aren’t looking to fill the most traditional roles.

Where a company might have looked to hire an accountant in the past, today they are looking at more creative voids.

Sure, accountants and those traditional jobs are still in demand but Indeed.com has compiled a list of the most in-demand creative positions at small businesses nationwide. And there is definitely a marked increase in these positions opening.

“Creative roles are as essential to the success of a small business as any other traditional position within an organization,” says Paul Wolfe, Indeed vice president and head of HR.

Based on data gleaned from Indeed’s job boards and listings by small businesses, designers and writers are most in demand. Of the top 10 positions most in demand, six are either designers or writers.

The most in-demand job category is Graphic Designer. The job title of designer is second most in demand. “User experience” and “user interface” designers — presumably for websites, mobile sites or business systems — are fourth and seventh, respectively, on Indeed’s top 10 creative jobs list.

Technical writers and writers , in general, are third and ninth, respectively.

“Creativity initiates innovation and garners a competitive edge in the marketplace. As such, small businesses are adding those team members to their relatively small organizations as a necessary asset for success,” Wolfe says.

Companies that are ramping up marketing efforts in the near future should be advised. If these positions are in demand, it’s going to cost a little more to get the best talent. If your company isn’t focused on boosting the quality of its marketing messages, maybe it should be. Your competition may be beating you to it.

And if you’re a freelancer, this should give you some inspiration. 2 Comments ▼