Another Example of Technology Driving Innovation 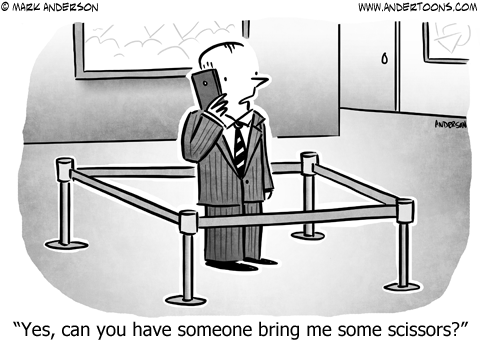 Often when I write these little narratives up I have a general idea of where the cartoon came from. The details might be a little hazy, and I’m inclined to exaggerate for comic effect, so you probably get around 70 percent accuracy.

This cartoon, however, I can tell you exactly where and how I came up with it.

I was at the bank standing in one of those pole/rope heading lines, and I thought ‘what if this was totally closed off?’

I turned to the woman behind me who was looking at her phone and I said ‘wouldn’t it be funny if they totally closed this off and we were stuck in here? Ha-ha!’

The woman did not think it was funny. She looked up wide-eyed as if I was going to attack her. ‘What?! Are you talking to me?!’

‘Yes,’ I said, ‘I said I thought it would be funny if this line was like totally closed off and we were stuck in here.’

Stunned silence from the woman.

‘You could just go underneath,’ she spat.

And that’s why I don’t talk in bank lines anymore.