Learn More About the Future of Work in the Gig Economy

Disruption is affecting every human industry on Earth, work included. As the title suggests,"The Gig Economy: The Complete Guide to Getting Better Work, Taking More Time Off, and Financing the Life You Want" is about how job seekers can thrive when faced with a trio of events (automation, outsourcing, or job elimination) caused by that disruption. "The Gig Economy" helps readers take the driver's seat in the economy and own the lifestyle of their dreams. 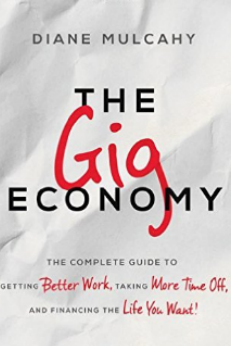 In the new world of work, employees are increasingly facing a triple tale of woe: automation, outsourcing, or deletion of their jobs. In such an environment, navigating a successful and profitable career can be understandably difficult. The Gig Economy: The Complete Guide to Getting Better Work, Taking More Time Off, and Financing the Life You Want promises to help readers understand and navigate this new world of work profitably and intelligently.

What is The Gig Economy About?

The Gig Economy invites readers to reevaluate the future of work. Instead of wishing for “the good old days” when a worker could stay in one job until retirement, current workers need to prepare for a radically different future. Instead of trying to fit life around the “9 to 5”, workers can now fit their “9 to 5” around their life with various income-generating activities like freelancing, side gigs, part-time jobs, contract work, and on-demand work. This future comes with less stability, but also offers more control.

The Gig Economy certainly offers benefits to employers, who are tired of overpaying for labor. As Diane Mulcahy points out, hiring a full-time employee can be expensive, especially in the areas of taxes and benefits. The second of these expenses (which is growing, in part due to the Affordable Care Act) is causing many employers to consider more temporary or contract workers who can provide the labor without the expensive overhead. Employers can access a global pool of talent much faster in this economy as well, providing access to an unprecedented workforce at any time of the day or night.

But the book is focused on more than just helping workers find gigs. It also looks at building a financial base to sustain their lifestyles. It delves into successful personal finance in the world of the gig economy. In that world, the key to success is diversification. Instead of relying on a single job (with an uncertain future), the book urges readers to develop multiple streams of income. With this base of income and job flexibility, workers leverage their hard-earned money from the gig economy into a sustainable and rewarding lifestyle.

Mulcahy is an author and senior fellow at the Kauffman Foundation, adjunct professor and Executive-in-Residence at Babson. She is also a former venture capital investor as well as holding an assortment of part-time and full-time jobs within the gig economy. When not diving into this new economy and its new rules of work, Mulcahy enjoys yoga, running, wine and reading.

What Was Best About The Gig Economy?

The best part of The Gig Economy is the deeper perspective provided by the author on the future of work. This perspective may be gained from the author’s own experience as well as the experiences of those who took a course based on the same philosophy used in the book. It’s a perspective going far beyond the advice to “just work for Uber”. In the book, Mulcahy offers a radically new view of finance and ownership to accompany her beliefs about the future of work.

The Gig Economy offers a helpful response to job seekers who are confused about the changing future of work. Mulcahy points to the reality of declining jobs, stagnant wages and increased unpredictably and offers a proactive way out. This way out, however, doesn’t focus much attention on the “dark side” of the gig economy. As other writers have pointed out, participation in the “gig economy” has a lot of legal and financial uncertainty. Workers in the gig economy still face steep competition and an uncertain work schedule. Having an Uber app doesn’t guarantee all of your problems will be solved.

Why Read The Gig Economy?

The Gig Economy is an ideal book for job seekers or currently employed workers who want more than “Ten Ways to Make a Quick Buck Online”. Mulcahy’s book covers much more than that. It helps readers understand the trends that led to the gig economy and the mindset that will help you prosper. This proactive approach includes discussion on how to build a portfolio of multiple income streams, benefits and services that will help anyone thrive in the gig economy before that economy hits full stride.

Charles Franklin is a Book Reviewer for Small Business Trends. He has a background as a professional reviewer, and is also a content provider and customer relations professional.
One Reaction
Subscribe
Follow @smallbiztrends
RSS LinkedIn Pinterest iTunes