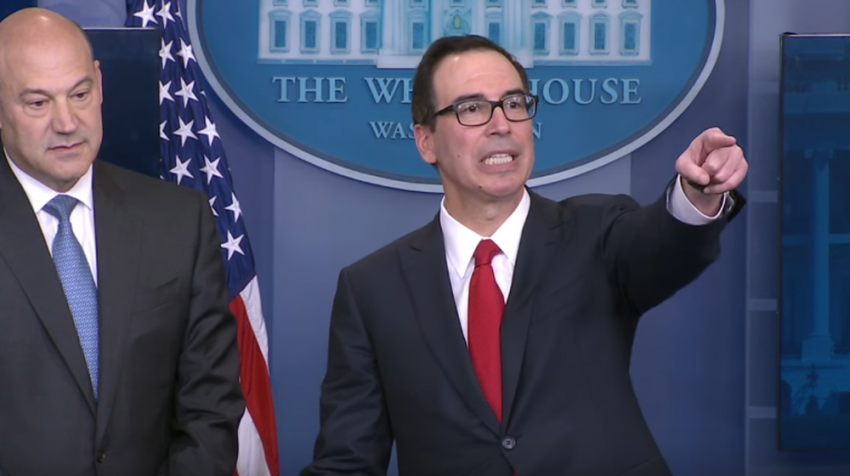 Historic tax cuts for American small businesses could be just around the corner.

In an announcement at the White House today, Treasury Secretary Steve Mnuchin unveiled proposed sweeping reforms to the tax code for all U.S. businesses. At the same time, President Donald Trump’s chief economic advisor Gary Cohn presented proposals to overhaul the personal tax code. That would impact millions of self-employed individuals and sole proprietors in the U.S. too.

The top rate for all American businesses under the Trump tax plan will drop to 15 percent under the proposal.

Check out the announcement from the White House press briefing room. During it, officials stressed the cuts were aimed at economic growth and job creation for American businesses:

The 15 percent rate is a big difference from the current 39.6 percent top rate for what are termed pass through businesses where earnings get reported on personal tax returns.

Some might expect the focus of a new tax cut proposed by the Trump administration to include companies like GM and Amazon. But an expert says the tax cuts unveiled by the White House will be a boost to your business too!

Ben Lau is the Chief Investment Officer at Apriem Advisors. Lau told Small Business Trends the reduction will be a boon for a wide swath of small businesses from the smaller mom-and-pop shops to bigger firms like those in the financial sector.

“Cutting that pass through rate to 15 percent would be a tremendous advantage,” Lau said in an interview following the announcement. The other proposals include reducing the number of personal tax brackets to three at 10, 25 and 35 percent. Currently there are seven tax brackets.”

Lau points to other positives for small businesses too. An example is the proposed repeal of the estate tax. This is one hurdle small business owners face when putting together a succession plan. It’s the method business owners use to transfer ownership when they retire or the bulwarks they put in place to guard against injury and disability.

“Most small businesses struggle with transition planning. Getting rid of the estate tax would get rid of a lot of the liquidity problems that future generations might have,” he says. The move would free up small business capital that would otherwise be taken up.

Lau is a macroeconomic expert and as such, he commented on how the bigger picture could be another positive for small business.

“Most people are employed by small businesses,” he said. “If people get more money in their pocket, this could really help to jump start the economy.”

During the press conference, Mnuchin said he is in talks with members of the U.S. Senate and House leadership about legislative action. The House would approve initial legislation before it’s passed to the Senate and then eventually to the President’s desk.

Previous estimates on when exactly all that will happen have ranged from August through the end of 2017.

Rob Starr is a staff writer for Small Business Trends. Rob is a freelance journalist and content strategist/manager with three decades of experience in both print and online writing. He currently works in New York City as a copywriter and all across North America for a variety of editing and writing enterprises.
5 Reactions
Subscribe
Follow @smallbiztrends
RSS LinkedIn Pinterest iTunes