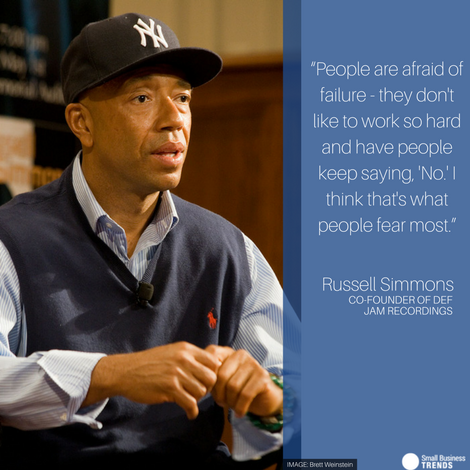 Russell Simmons, co-founder of Def Jam Records and founder of Phat Farm, doesn’t have formal training or background in running a business. Yet he’s one of the most celebrated names in the music business.

Behind his phenomenal success is his undying passion for work and entrepreneurship.

He was married to model Kimora Lee and has two daughters from the marriage. According to CNN, his net worth in 2011 was $340 million.

In 1978, Simmons started promoting rap acts and managing Curtis Walker aka Kurtis Blow. The following year, he launched Rush Productions, which became one of the largest African American owned media firms in the U.S.

A big milestone in Simmons’ career was the release of the Run–D.M.C. single “It’s Like That” in 1983. Soon after, he created the Def Jam record company, which is the largest rap label in history.

Man of Many Talents

Simmons is not just a hip-hop mogul. He created immensely successful clothing lines such as Phat Farm, Tantris and Argyleculture.

Over the years, he has ventured into wireless phone, debit cards, online media and television.

What’s remarkable about Simmons is his passion to pursue new ideas. He once told Enterpreneur.com, “I think the world is a white space. You just have to pay attention to what people need and what has not been done.”

By challenging conventions, Simmons has set a great example for small businesses.

He advises businesses to sell what they really believe in and feel passionate about. As he told CNBC, “You love something, you go to work, you try to give what you love to other people.’

“You sell what you love to other people.”