Getting Back to Full Employment: Maximizing America’s Workforce 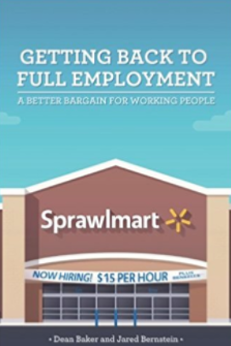 Is America making the best use of its workforce? This has been one question that America has struggled to answer — under every administration, regardless of party affiliation. Getting Back to Full Employment: A Better Bargain for Working People contends that America can (and in fact must) do better when it comes to leveraging its resources for its workforce. The book analyzes the various issues and consequences of a world where full employment was again a reality.

What is Getting Back to Full Employment About?

What would America look like if every American that wanted a job was able to get one? The answer is full employment, defined in Getting Back to Full Employment as “the level of employment of which additional demand in the economy will not create more employment.” As the book further explains, under full employment, “All workers who seek a job have one, they are working as many hours as they want to or can, and they are receiving a wage that is broadly consistent with their productivity.”

To most people, this sounds like a perfect world.

Achieving this level of employment is not an easy wave of the proverbial magic wand, however. The path to full employment is hindered by barriers that block its progress. First, the very definition of “full employment” raises some  debate. For some leaders and economists, the biggest barrier to full employment stems from the “skills gap” (Basically workers don’t have the skills employers require). Others worry over the consequences of full employment — potentially inflation. And some economists question whether we are even measuring the concept correctly, given the rise of people who chose not to rejoin the workforce.

The book’s position is that America’s current trend of unemployment (by any definition) is not a structural one, but a cyclical one that developed out of the post-recession housing bubble. Since that is the case, we can approach the solution with strategic investment, the book argues. We have the need (crumbling infrastructure, demand, economic incentive, etc.) to fix things, the authors argue, but we have to act now rather than later. The book explores, debates and defends the various ways to keep Americans employed and the economy running at a maximum level of social, economic, and cultural output.

Author Dean Baker is an economist and co-founder of the Center for Economic Policy Research, an economic think tank. Baker has previously written for magazines including The Washington Post and Atlantic Monthly and served as a consultant for the US Congress, World Bank, and The Organisation for Economic Co-operation and Development (OECD).

Co-author Jared Berenstein is a Senior Fellow at the Center on Budget and Budget Priorities, an economic research and policy think tank. Berenstein is former Chief Economist and Economic Adviser to U.S. Vice President Joe Biden.

What Was Best About Getting Back to Full Employment?

The best part of Getting Back to Full Employment, for people interested in a deeper conversation about social problems, is the deep amount of conversation surrounding the seemingly  obvious question: “What happens if everyone that wanted a job got one?” The book breaks down the debates politicians and other governmental leaders have over the issue. It demonstrates that the answer isn’t as clear-cut as popular media makes it out to be. For readers who want a deeper conversation about America’s unemployment issues, this book has plenty to offer.

Getting Back to Full Employment will be best enjoyed by those who are invested or deeply interested in economics and social policy. The book does its best to break down policies to an understandable level but readers will need some familiarity with economic terms and concepts. One group needing more attention in the book is the small business community. The book discusses the need for public-private partnerships, changes in employee labor policies and other areas that involve business owners but don’t provide them any concrete action steps.

Why Read Getting Back to Full Employment?

As mentioned in the paragraph above (and the paragraph prior to that) Getting Back to Full Employment will be best appreciated by those people with an vested interest in economics. The book offers a deeper debate about the “getting America back to work” conversation that happens in every political campaign. For those readers who are tired of the same rhetoric and want to understand what might be really at stake (or at least what some really smart people think might really be at stake), this book provides an answer and a peak at some of the solutions that might get America going in the right direction.