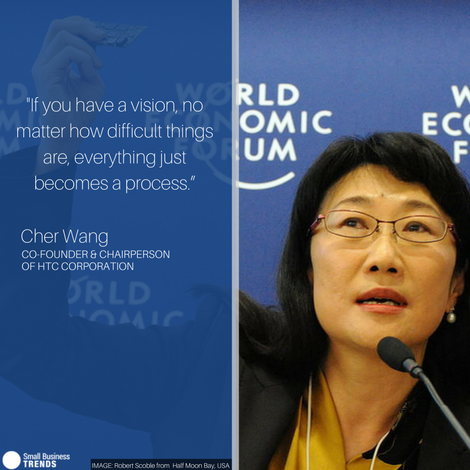 Women entrepreneurs shouldn’t lose faith about being able to make a mark in the tech sector. One woman able to successfully break into this male-dominated industry has been co-founder and Chairperson of HTC Corporation (TPE:2498), Cher Wang.

With a staggering net worth of $850 million, Wang is one of the wealthiest people in Taiwan.

Business in the Blood

Wang was born into a family of successful entrepreneurs. Her father ran a plastic empire until his death at the age of 92, while her sister co-founded motherboard maker First International Computer in 1980.

After graduating from the University of California, Wang joined her sister’s company. In her new job, Weng traveled around Europe making a pitch for the motherboards.

Interestingly, it was during her trips to Europe that Wang realized personal computers were inconvenient to carry around. She felt there was a need for handheld devices that could easily fit inside a briefcase. This proved to be the idea that eventually led to the birth of HTC.

In its early days, HTC built laptops, which didn’t see the success Wang was hoping for. Luckily, she had a Plan B that involved building mobile phones and PDAs in partnership with other companies.

Over the years, HTC built a strong reputation of being the official manufacturer of handheld devices for all top mobile phone brands.

What You Can Learn from Wang

Wang is an inspiration for businesses, particularly for those owned by women.

Her persistence in expanding HTC and turning it into a success story deserves applause. It’s even more special because the company had to face serious competition from some of the biggest names in mobile technology.

Currently, Wang is setting her sights on capturing the virtual reality market with the release of HTC Vive. It demonstrates her unique ability to spot an opportunity and adapt to stay relevant. That’s a big lesson for businesses.