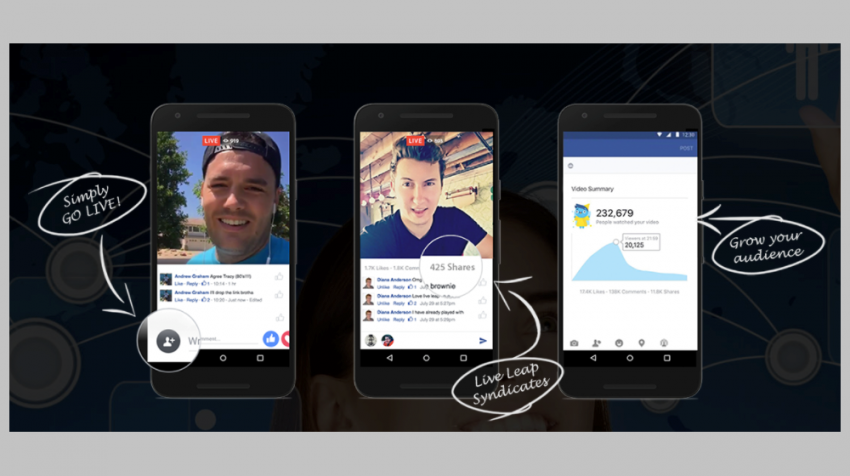 Facebook Live is one of the fastest growing video streaming services in the world. Users are able to easily record, edit and share videos with their friends and followers.

Essentially, Facebook Live offers users their own video channel. The only drawback is that the sharing potential is limited to the original Facebook page from which you broadcast. Since Facebook has in the past not allowed access to its API’s, developers have been limited in what they could do with the content. So up until now where you created content has been the only place you could share it.

Until now it wasn’t even possible to share your video across your other Facebook profiles — for example, Groups and Pages — let alone other social media channels.

Enter the Live Leap app, the world’s first Facebook Live sharing tool and the only one officially approved by Facebook. The tool does a great job of overcoming Facebook Live’s limitations.

Live Leap not only lets you sync your video throughout all your Facebook profiles, but it allows you to simultaneously broadcast on other social media platforms such as Twitter and LinkedIn and even to your personal email list. The ability to simultaneously cast your Facebook Live video feed opens many opportunities. Businesses are now able to leverage Live Leap as an integrative communication tool.

Once a video is created, it can be shared internally, amongst team members and partners, as well as externally. Training sessions and marketing promos can be delivered via Live Leap. The features seamlessly bring together Facebook, your other social media channels and many of your other contacts.

Before you initiate your Facebook Live stream, the Live Leap user interface lets you choose the channels to make the video available with a single click.

As stated earlier, not only will your video be shared across your chosen channels simultaneously, but it can also sync with your email and SMS lists. The real power of Live Leap, however, comes in its notification and automation. The integration allows you to customize emails, tweets and even SMS as alert notifications for your live stream.

Letting your user groups and contact lists know that you are Live will go a long way towards growing your audience and creating higher levels of engagement. And that’s Live Leap’s mission — to help its users share and grow their networks.

Live Leap’s pricing structure has two versions: Basic for $19 per month and Pro for $49. Both tiers include all sharing, notification and automation capabilities. Where Pro differs is in its level of support, which includes advanced training, VIP support as well as a Page Builder — a feature add on.

If you don’t want a long term commitment, there is a seven day trial for one dollar.

The Facebook ecosystem has close to two billion users, and increasingly video is becoming the preferred mode of communications. The Live Leap solution gives small businesses access to this audience as well as to other social media outlets at an affordable price point.