4 Signs That You Must Pivot or Collapse 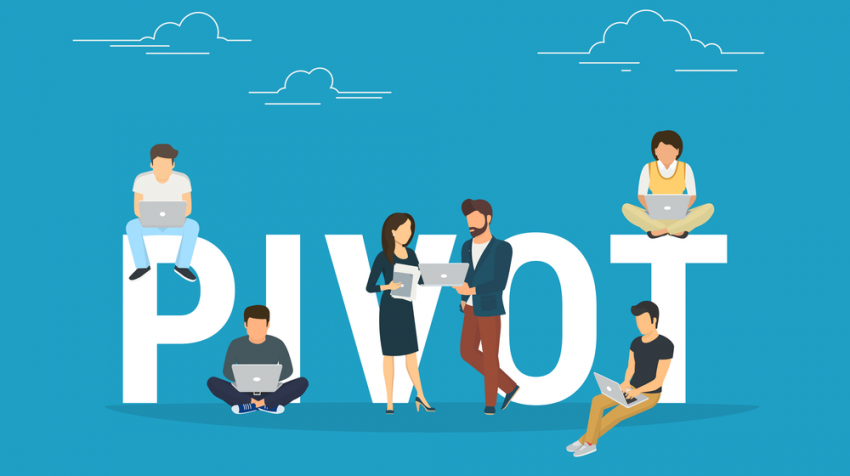 The vast majority of startups fail within the first couple of years. While this is sobering, the fact is that many of these failed ventures could have been successful if the entrepreneur behind the startup would have simply recognized the need for a slight pivot. Are you willing and able to face the reality that a pivot could be in store for your business?

What Does Pivoting Actually Mean?

Anyone familiar with basketball has heard the term pivot used by a coach. Within the context of the hardwood, a pivot is a move a player makes after he picks up his dribble.

“Pivoting is done on the ball of the foot,” coach James Gels explains. “You do not want to become flat-footed or have your weight back on your heels. The ball of the pivot foot must be in contact with the floor at all times and must not slide sideways. When you pivot, just actually spin around on the ball of your pivot foot.”

In other words, a pivot is nothing more than keeping one foot in contact with the ground and using your other foot to move around in order to find a new angle or gain an advantage over your defender.

But it’s also important to note the distinction between pivoting and immediately passing. When you pivot, you’re essentially saying, “I’m no longer in a good position to score/pass, but I’m not quite ready to give up the ball. If I could just gain a different angle, maybe I can successfully get rid of the ball.” In a pivot, you aren’t totally abandoning your current situation. Instead, you’re looking for new options that may arise out of your current state.

The term pivot is used a lot in financial circles, as well. You’ll hear financial analysts and stock traders talk about “pivot points” all of the time. What they’re referring to is the point on a stock chart where the market changes directions for the day. By spotting a pivot point, a trader is able to identify a point of leverage and switch gears (so to speak) in order to profit from a change in the marketplace.

The business definition of pivoting, according to Eric Ries, entrepreneur and author of The Lean Startup, is a “structured course correction designed to test a new fundamental hypothesis about the product, strategy, and engine of growth.” It’s akin to leaving one foot planted on the ground, picking up the other foot, and seeing if a better opportunity exists when you change your orientation. But instead of a basketball, high-tops, and hardwood, you’re dealing with a startup, revenue, and a unique product.

See, the term pivot is commonly used in many different areas of life. But nowhere is a pivot more critical than in the business world. A failure to pivot at just the right time can result in a total collapse of your business. A pivot in the wrong direction can also lead to failure. In fact, you have to pivot at the right time and in the right direction in order to reap the rewards of such a transition.

Groupon, the popular online deal site, is a relevant example of what a successful pivot looks like. Unbeknownst to many, the site actually stemmed from another website, called The Point. It was an online activism platform and was met with very little acceptance in the marketplace. But instead of closing up shop, founder Andrew Mason and his investors performed what has now become a billion-dollar pivot to become profitable.

The Point, which was basically designed to help fix what was broken in the online fundraising industry at the time, did a lot of things wrong. But Mason and his team noticed that it did one thing very well. It allowed groups of people to come together, combine resources, and enhance their buying power. So, instead of totally giving up on The Point, Mason merely pulled this “good part” out and turned it into a group deal site that’s now known as Groupon.

There’s obviously a lot more that went into the pivot — and you can read about it here — but the basic takeaway is that Mason successfully executed a pivot at a time when it looked like his only option was a collapse.

4 Signs That You Must Pivot Pronto

Okay, enough about basketball, stock markets, and deal sites — let’s talk about you. If your startup feels like it’s stuck in place or slowly dying off, it’s time to face reality and start thinking about your two options: pivot or collapse. That may seem overly dramatic, but unless something changes, this is where you’re headed.

But before you pivot, you probably want to be sure that you’re making a smart decision. So, let’s take a look at some of the top signs that you need to pivot as soon as possible:

You may have had a great idea when you first launched your venture. But the problem is that you won’t be the only one with the idea for long. Bigger companies with much deeper pockets and more powerful workforces often come in and run with somebody else’s idea and do a better job of executing. That’s just the nature of the business world.

If you launched a small tech venture last year and then IBM came in and essentially one-upped you, you don’t really have a choice but to do something differently. You aren’t going to go toe-to-toe with IBM and win. But instead of scrapping the business altogether, you may be able to use some of your resources to pivot in a proprietary direction that others can’t follow.

2. Limited Response from the Marketplace

There’s a difference between doing some customer research and testing before going to market and then actually taking a product to market and trying to sell it to customers. People often say they’re interested in something or willing to pay X dollars for a product, but then totally reject the product when it goes from a prototype to an actual item with a price tag.

If you’ve launched only to experience a lack of customer enthusiasm, then this is a sign that something isn’t right. Either your marketing and branding strategy is terrible, or the product itself doesn’t get people excited. A pivot may be your best option for getting out of the mess.

3. Your Perspective Has Changed

Sometimes a pivot isn’t rooted so much in the product or venture as it is in the founding team. Perhaps you’ve learned a lot since launching and your perspective has changed. As a result, you now see new opportunities that you previously didn’t know existed. This happens a lot when entrepreneurs get more familiar with a niche and begin to understand who their customers are and what they really want.

In this situation, the key is to avoid rushing into a pivot. Serial entrepreneur Steve Blank always suggests sitting on new insights for 72 hours to see if they still seem as good after reflection. If you still see more potential in the pivot, then you may want to start working in this direction.

The fourth sign that you need to pivot is that one part of your business venture is more powerful than the sum of the parts. This is what happened in the Groupon situation. Mason recognized that the best aspect of The Point was the collective buying power it gave people, so he chose to get rid of the other parts and turn that aspect into a new business (i.e. Groupon). Could you do something similar?

See Also: What Business Users MUST Know About the New Skype

Entrepreneurs often put off a pivot because they feel like it’s a sign of weakness – as if they’re publicly admitting failure for everyone to see. But the reality is that the opposite is true. A pivot shows that you’re aware of your surroundings and willing and able to recognize new opportunities as they arise. Investors, business partners, and customers respect this.

So next time you find yourself facing one of the four circumstances outlined in this article, consider the viability of a pivot. It might be the best decision you ever make – just ask Andrew Mason.