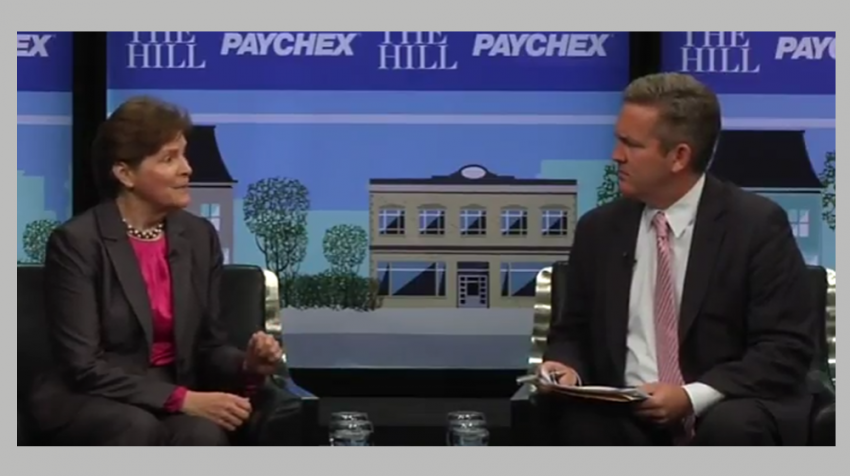 Senator Jeanne Shaheen (D-NH), is the Ranking Member of the Senate Committee on Small Business and Entrepreneurship. She understands there’s a difference of opinion — some groups oppose raising the minimum wage and some support it. However, Shaheen also knows whee she stands on the issue as she explained.

“I personally support raising the minimum wage,” she said.  She also said that because of the low unemployment rate in New Hampshire ( 2.8 percent in April) , employers have figured out they need to go a bit higher than those bare minimums if they want to keep quality workers. That said, the minimum wage in Shaheen’s state is still $7.25 per hour, the rate set as the federal base standard.

“It’s important to make sure the people can make a living when they are working. Unfortunately at the rate of our minimum wage today, people can’t make a living,” Shaheen said.

“Overregulation is one of the problems that businesses face all across the country,” he said, mentioning President Trump’s drive to get rid of two regulations for every new one.

“What doesn’t get told too often is when you artificially raise the minimum wage, you’re often cutting off younger people at the entry level.”

In other words, Chabot is concerned artificially inflated wages could actually price entry level applicants out of jobs in some areas and industries. That’s why Chabot opposes government setting the benchmarks rather than allowing market forces determine whether wages go up or down.

Chabot also says the whole issue should be decided at the state level and not by the federal government. He stressed his opinion  the country is too diverse geographically and economically to justify a blanket one-size-fits-all approach.

“Wages in rural Mississippi should be different than they are in downtown Manhattan,” he added.

Having the federal government determine what the minimum wages are “messes up the economy,” Chabot furthered.

The minimum wage in the United States is set by a combination of local, state and federal law. In July 2016, the federal government mandated a nation wide minimum wage of $7.25 per hour. Under current adjustments that include referendums, legislative action and automatic bumps, the rates are changing across the country, with NYC’s minimum wage set to reach $15.00 dollars by 2018.

Current minimum wages across the United States can be seen by clicking here.