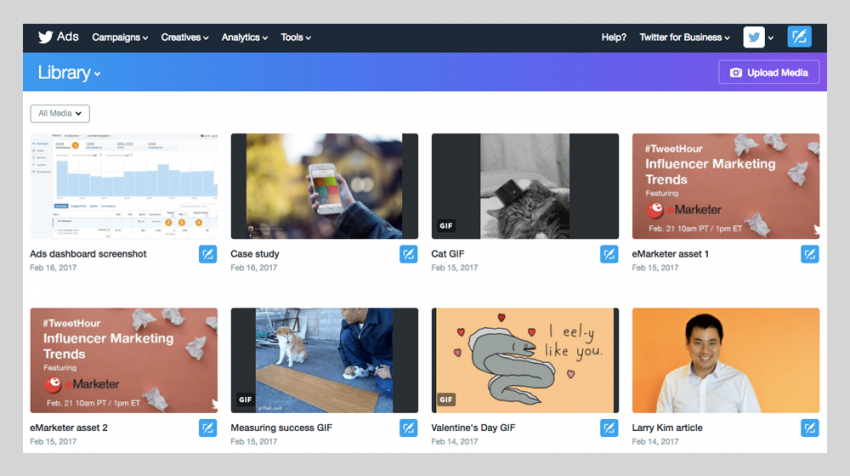 Twitter (NYSE:TWTR) again pushed use of its Twitter Media Library this week. Announced back in March, the library collects all the images, videos and GIFs you have ever uploaded to Twitter to make re-posting the same visual content easier.

“Social media managers sure do love a good visual,” Vega wrote. “And we do know that adding media to a Tweet not only increases engagements but also helps Tweets stand out.”

The eagerness to promote the feature isn’t surprising. With Twitter’s anemic user growth, the microblogging platform has been trying just about anything to generate traffic and engagement.

It’s true that more use of visual elements like photos, videos and GIFs may boost engagement on the site. But the media library addresses a real pain point as well.

“Very few people may realize that behind a visually enticing Tweet there’s a social media manager’s desktop that has turned into a forest of screenshots, video files, GIFs, and saved images.”

Instead, Vega said the Twitter feature allows those same embattled social media managers to go to the library, find automatically saved versions of all visual content they have posted to Twitter in the past and compose a new tweet right from the library.

As a small business owner who may also be wearing the hat of social media manager, you can certainly appreciate the time saved here.

You can even schedule Tweets from the library.

“For even better organization, the files are organized by type so you can easily find that cute cat GIF that took you forever to decide on,” Vega added. “And because it’s an absolute must to plan ahead as much as possible — you can upload media directly to the library to use when you’re ready to Tweet it out.