5 Faces of the Gig Economy: New Study Reveals All (Infographic) 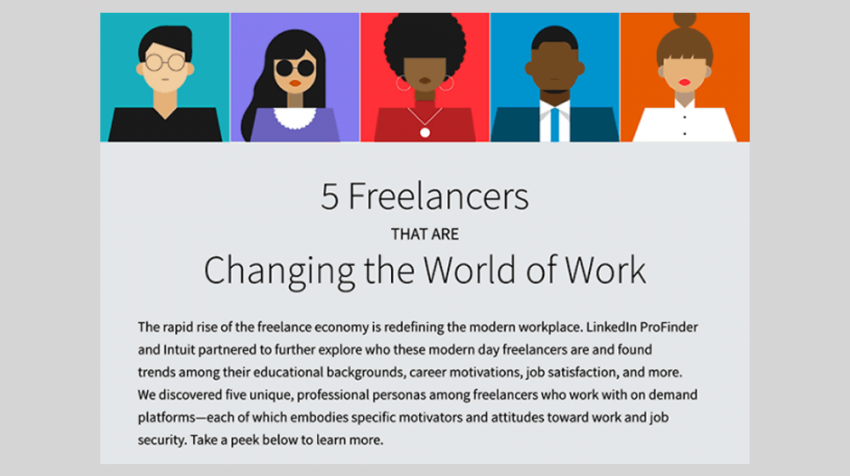 The gig economy is growing at a pace faster than some might have imagined. And driving it forward are freelancers who are redefining the modern workspace.

Not all of these people are gravitating to freelancing for the same reasons. A new infographic created by LinkedIn ProFinder and Intuit (NASDAQ:INTU) reveals there are five different types of freelancers in the gig economy today. They have different income levels, career objectives and motivations.

As the name suggests, side giggers are into freelancing because they want to earn extra money. As a result, they are most likely to have a traditional job as well.

These freelancers are driven by financial security and job flexibility. And their current gig helps them earn about 19 percent of their total income.

For this group of freelancers, a gig provides an opportunity to make money after losing a job. They tend to take on multiple gigs and rely on them until a traditional job comes along.

Their current gig makes up for about 22 percent of their total income. They make $9,400 on average.

Career freelancers are the most diverse and satisfied group of freelancers. Their primary objective is to gain more experience and learn new skills to advance their careers.

They also look at gigs as opportunities for social interaction. Not surprisingly, this group mostly includes millennials who are into part-time freelancing.

Their current gig generates about 26 percent of their total income and they make $9,700 on average from freelancing, per year.

For business builders, gigs are an effective means of supplementing or expanding an existing business. These freelancers like being their own bosses and dislike answering to a supervisor.

Their current gig contributes to around 30 percent of their total income. On average, they make $12,300 a year.

These freelancers love what they do and it’s their passion that drives them to look for gigs.

They are well-educated, value flexibility, work the fewest hours, but earn the most per hour from their gig work.

At present, their current gig generates 25 percent of their total income. They make $9,000 a year, on average.

Planning to Hire a Freelancer?

As the infographic reveals, it’s worth remembering that not all freelancers have the same motivations. That’s why you should be careful when you hire one for your business. For example, if you are looking for someone to stick around for longer, you should probably not pick a substituter.

A good understanding of a freelancer’s job expectations and career plans can benefit your business.

For more information on the five types of freelancers, check out the infographic below: